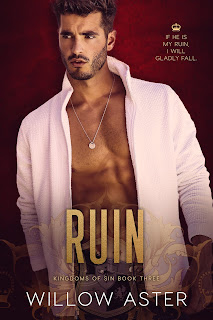 Ruin is the third and latest novel in the Kingdoms of Sin series from Willow Aster. This time around, we've got Ava Safrin, the seventeen-year-old Princess of Farrow and known for her rebellious streak. She's never been interested in the trappings and responsibilities that came with being a member of a royal family. Too many people saw the title, but never recognized that there was a very real person behind it. When she meets Gentry Barrington, he doesn't see anything or anyone except Ava, and the kiss they share is one that leaves them fantasizing about each other for months. Then they see each other again, only this time, they're taken aback. Gentry turns out to be Ava's new teacher, and at twenty-five, he's eight years older than she is. He's shocked over the fact that he's been thinking non-stop about is not only eighteen and his student, but she's also a royal princess. Will they be each other's ruin?

As always, Willow Aster did not disappoint, with a story that had romance, intrigue, and suspense. I liked the connection shared by the main characters, and the difference in their ages along with the whole teacher-student aspect gave it this deliciously forbidden feel to it. There's a lot that goes on in the book; having said that, there's quite a bit that's still waiting to get resolved. As far as the relationship between Ava and Gentry is concerned, they do get their happily-ever-after, so no worries on that end. The pace was enough for me to feel that thrum of anticipation while not being too drawn out, and we do get glimpses of past couples as well as a bit of an idea what could be waiting for readers when the fourth and final book is released. Ruin can be read as a standalone, and it gets four stars. 🖤