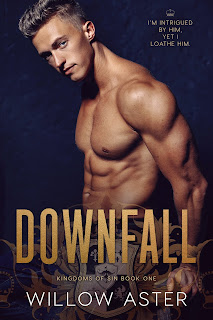 Upon doing a quick check on Goodreads, I may have shocked myself to find out that it's been more than six years since I last read a Willow Aster novel. SIX YEARS! Maybe I thought it had only been a couple or so years since the two books that I read back in 2013--True Love Story and In the Fields--have stayed with to this day (they were among my top reads for that year). But there you have it. Six years, but now, there's another Aster-penned novel in my tablet, and not only does it also happen to be the first in her new series, but it was a welcome re-introduction to this author's writing. Downfall is merely the first in the Kingdoms of Sin series but it was a pretty good start to it.

Maybe it was more wishful thinking than anything else on the part of Princess Eden of Farrow--aka Eden Safrin--that an arranged marriage could be a happy one. From afar, her intended shone brightly, but upon closer inspection, Prince Luka of Niaps--aka Luka Catano--was murky, making it immediately clear that he wasn't ass hopeful about their planned nuptials for when they turn twenty. The two are like oil and water, making them wonder what it was their parents must have seen to believe that they would be the ideal match for their two royal families. They're forced into each other's company, and while the animosity remains, there's something else that lingers beneath the surface. Will a time come for their union to not just be out of duty but out of love and desire?

Let me just put this out there: Luka was an asshat, and he stayed that way throughout the book. Were there times that he did show love and affection towards Eden? Yes, there were, but for all intents and purposes, he was very much an asshat. Eden, on the other hand was a main character who developed more than her counterpart, however, I do wish that we got to know them better than we did. I wanted to dive deeper into what made them tick and hoped for far more character development than what was there. I did, however, like the story as a whole. The idea of arranged marriages--whether royal or otherwise--seems to be the "in" thing again in the romance world as of late, so I'm always looking for that extra bit of something that an author adds to their story to make it stand out, and the author did just enough to do exactly that. Four stars for Downfall and anticipation for book two. ♥