Review: Change in Strategy by Sierra Hill (Change of Hearts #2) 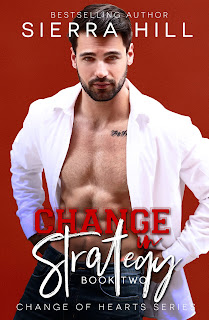 Change in Strategy is the second book in Sierra Hill's Change of Hearts series, and it features two strangers who meet and share a series of kisses that sear into their memories only to be shocked when they see each other again...in the same office. So yes, this is an office romance that has a twenty-one-year-old college student named Peyton Burke who has temporarily moved from Tempe, Arizona to Los Angeles, California for her internship with Jensen's Men's Fine Clothing and Design. She's shocked to find out that the man she was sharing kisses with at a bar is none other than the man she's now interning for--Brody Jensen. At nearly thirty, Brody is one of the youngest CEOs in the industry, and he doesn't quite know what to do with the unexpected sight of the young woman he was making out with before. The fact that she'd lied and gave a fake name and number doesn't exactly win her any favors, but the chemistry between them is palpable. If they act on it, what will ultimately come of it?

This was a good second offering in the Change of Hearts series, and I liked that both the main characters had interesting back stories. Peyton's life prior going to college wasn't the easiest, the aftereffects of which still remain. She seemed to already be in the process of blooming while at school, thanks also in large part to having a best friend slash roommate like Kyler Scott, who I REALLY hope gets his own book. When she meets and spends time with Brody, it's as if she truly comes into her own. Speaking of Brody, goodness, but he was the sweetest when it came to Peyton. I adored them together, and I enjoyed reading Change in Strategy, which is why it gets four stars. ♥

Read my reviews for the Change of Hearts series: