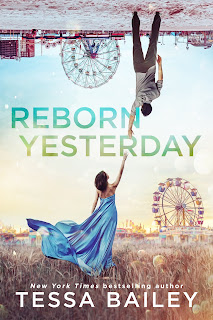 Ooh, I love it when a favorite author manages to surprise me in the best ways possible! Tessa Bailey's Phenomenal Date series started was every bit as fantastic as I'd hoped it would be, making for one of my absolute favorite reads this year. Reborn Yesterday introduces readers to twenty-four-year-old Ginny Lynn, a mortician trying to continue her father's legacy with the funeral home he left her and her stepmother. When her most recent "client"--one she's aptly nicknamed "Dreamboat"--sits up, she's shocked but wonders if a mistake was made and whoever had brought him to the funeral home just assumed he was dead. What Ginny quickly learns is that Jonas Cantrell is very much NOT alive. He's a vampire who has been twenty-five years old since 1956, and there's simply no way he can allow Ginny to remember knowing anything about him. But Ginny refuses to have Jonas erase her memories of him. Jonas himself hesitates to do so, even when he knows all too well that the more time he spends with Ginny, the more rules he breaks--and a prince like him is never supposed to break any of the rules...but rules be damned.

What didn't I love about this book?! Seriously, if I had to nitpick, it would be one thing and one thing only: There's a line in the book where it points out that a vein in Jonas's temple ticked, but how does Ginny make this observation if she's blindfolded? Other than that, I was all in with this paranormal romance, and Ginny and Jonas were just so damned adorable together. Gah! I've read a lot of paranormal books--romance and otherwise--but it's been a good, long while since I last read a vampire romance that truly held me interest from the beginning and then took a piece of my heart by the end. Well, until Tessa Bailey's new novel, that is. I'm absolutely taken with the world she's created and smitten with her formidable and noteworthy cast of characters. Not only did I fall in love with Ginny and Jonas and their story, but now, I'm beyond curious as to what awaits Jonas's best friends and fellow vampires, Ethan and Tucker, and Roksana, slayer turned Ginny protector and bestie, as the series moves forward. Consider Ethan and Roksana's book--as well as Tucker's afterward--on my list of anticipated reads. I'm highly recommending Tessa Bailey fans and readers and lovers of paranormal romance check out Reborn Yesterday as soon as humanly--or inhumanly if that's what you'd prefer--possible. This gets five-plus stars and is a 2020 favorite! ♥