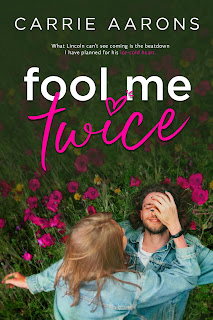 Fool Me Twice is the latest new adult (NA) romance and it's a standalone. Eighteen is the age of transition--moving from one's youth to becoming an adulthood. There are new adventures to be head and more responsibilities to take on. There are friendships that will endure and there are relationships that will break. In the case of Henley Rowan's best friend, Catherine O'Mara, she will never get to experience any of it. Cancer has taken the person who means the most to Henley. They were working through Cat's bucket list when Cat's time was cut short, but Henley promised she would work her way through the remaining items. The last one on the list? Getting revenge on Lincoln Kolb. He ended things with Cat once he found out she had cancer, which makes him the scum of the earth as far as Henley is concerned. She fully intends to make him fall in love with her and then she's going to break his heart, just like he did Cat's. The one kink in Henley's plan? Well, she never quite expected to fall in love with...him.

Carrie Aarons is just one of those authors whose books click with me, and I've enjoyed one heck of a streak, falling in love with her stories ever since I first discovered them back in 2016. I guess I was bound to come across one that I wasn't going to be as smitten as I was with her other books. Allow me to point out, though, that I was intrigued by the premise of Lincoln and Henley's story, and I was curious to see how everything would unfold. If any author could pull it off, Aarons was certainly one of them. For the most part, she did exactly that and I found myself eager to see how the truth would be revealed and how the two would reconcile everything. Alas, I was not a fan of Henley's. Sure, I knew going into the book that she would do what she did. It's right there on Cat's bucket list after all. But I felt that it went on for longer than it had to and the ending felt rushed. So yes, it did take away a bit from my overall enjoyment of the book. All things weighed and considered, however, Fool Me Twice still gets four stars. ♥

Purchase Fool Me Twice on Amazon.