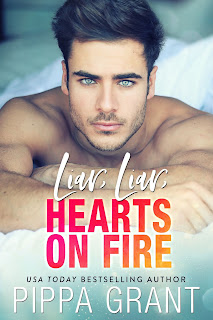 “You drive me insane twenty hours a day and I still want you,” he murmurs against my mouth.


A word of warning: If you're going to read this book, make sure you aren't going to do anything else other than just that--read. Why? Because should you be eating or drinking while reading this, you may have the unfortunate luck of choking on whatever you've got in your mouth (get your minds out of the gutter, people!) or snorting the drink out of your nose. Not that that's what happened to me. Cough, cough. I'm just being nice here. Ahem, ahem. I lost count of the number of the times I smiled, snickered, and snort-laughed (alliterations FTW!) while reading this third Bro Code novel, and it's chock-full of delightfully wonderful things to satisfy any romantic comedy reader out there. Pippa Grant has taken this series up a level with each and every new release, and I honestly didn't think anything could top America's Geekheart as my favorite from Grant, but Liar, Liar, Hearts on Fire is, indeed, on fire!

When Lila Valentine inherits the Copper Valley Fireballs from a distant uncle, she knows the team is in need for a major overhaul. After all, there's a reason why they're known as "lovable losers". What she doesn't know is quite how to handle working side by side with Tripp Wilson--father to two precocious children, widower, former member of mega pop group Bro Code, and now President of Operations of the Fireballs. He also happens to be part of a group that is hoping to buy the team from Lila--the group being all the members of Bro Code. Oh, and did I forget to mention that Lila actually met him weeks before he tried buying the team, except he introduced himself as Levi Wilson--his younger brother. She hates being lied to, and that's exactly what Tripp did... But he isn't the only one.

Two words: Duck. Peen. That's all I'm going to say about that. Just prepare tissues for the tears that may come once you find yourself uncontrollably laughing. I am now a believer! Yep, Pippa Grant is a goddess when it comes to romantic comedies. She does my heart good because I always come away from her books feeling lighter. Lila and Tripp were a hoot and a half! Or maybe I should say they were a quack and a half. Or a couple of fireballs! These two had a meet-cute that you pretty much knew would come back to haunt them, and haunt them it did, especially on Tripp's end. It went into enemies-to-lovers territory, and the tension between them was palpable, highlighting just how much chemistry they had. There were a lot--A LOT--of laughs, but there was also a twinge of angst, which made me a happy camper because I'm such an angst addict. Basically, this was a fabulous rom-com!

Tripp and Lila were fantastic main characters, with such rich back stories--and I totally guessed one major twist regarding Lila's!--but they were also backed with awesome supporting characters. From the rest of the Bro Code guys--Cash Rivers, Beck Grady, Levi Wilson, and Davis Remington--to Tripp's kids, James and Emma, as well as appearances from characters from Pippa Grant's other books (and I seriously need to go through all the books on her back list that I have yet to read!). And let's not forget the ducks, people! Gah! Hilarity galore, and it's got so much heart as well. Oh, and the heat. THE HEAT. Le sigh. Just go get this and get reading. Liar, Liar, Hearts on Fire will quack you up (Don't you just love dad jokes?), and I so ain't lying. This must-read easily gets five-plus stars! ♥