Review: Without You by Marley Valentine 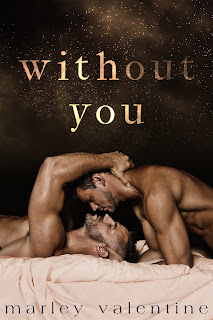 My first read from Marley Valentine was Devilry, the second novel in the multi-authored King University series, and I knew that she was an author I needed to pay better attention to. Now, Valentine releases her latest novel, and it's a standalone M/M contemporary romance that landed on my list of favorite top reads for 2020 as soon as I was done reading it. In Without You, we have two men mourning a common loss, but while for years, they treated each other with ambivalence, a year after they said goodbye to the man who meant so much to both of them, they find themselves in unfamiliar territory with one another. This had a great deal of heart peppered with enough heat, as well as angst intermingling with lighthearted moments, all alongside Valentine's beautiful and moving storytelling.

Twenty-nine-year-old Deacon Sutton has never quite fit in with his family. The middle child became the odd man out, and even though his relationships with his father and his siblings were good, his mother never failed to make him feel that he wasn't good enough. When the opportunity to leave his hometown of Billings, Montana came along, Deacon did exactly that. He goes on to co-own a garage with his best friend, and makes a home for himself in Seattle, Washington. But the death of his younger brother, Rhett, has him returning to Billings more often over the year since his passing than in the decade since he left for Seattle. Interacting with his mother leaves Deacon feeling wary and unsure, but it's the presence of twenty-seven-year-old Julian Reid that leaves him off-kilter--the same Julian who was once their neighbor turned Rhett's best friend then boyfriend. Nothing will ever be the same.

Oh, my heart. There are a fair amount of people who have told me that M/M romances tend to be mostly about sex. I know for a fact that isn't true, and my latest bit of evidence is none other than Marley Valentine's Without You. This was, hands down, one of the most heartrending yet soul-healing novels I've ever had the privilege of reading. Julian's life after the loss of Rhett had him in limbo, while Deacon's own relationship with his family, particularly with his mother, had him in his own purgatory. The main thing that tied Deacon and Julian together was their love for Rhett, but I appreciated that the author didn't use that is the impetus for these two to forge a friendship. If anything, there was an organic feeling to the growth and evolution of their relationship, and I loved having this front-row seat to them creating their own bit of history together. Aside from being a romance, this book was also about family--both the one we're born into and the one we create for ourselves. I won't suggest you add Without You to your to-be-read list ASAP; rather, I seriously recommend you read it NOW. This gets five-plus stars. ♥

Purchase Without You on Amazon.