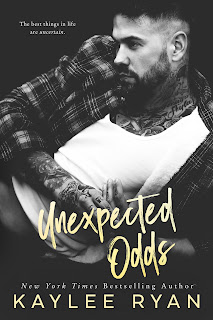 I love it when an author ends a series on a high, and that's exactly what Kaylee Ryan did with her Unexpected Arrivals series. Now, I'd happily signed up to read and review the fifth and final novel for this series as part of the release blitz, but when it finally came to read it, I realized that I failed to check if it actually got sent. I received an email on the day it was sent, but it never actually got to me. So, thank goodness for Kindle Unlimited and the fact that Unexpected Odds was enrolled in it because it allowed me the opportunity to still read this book in time for the event today. Whew! I've never been as glad as that very moment that I'm currently a KU subscriber.

Anyway, moving on... Unexpected Odds is a second-chance romance with a twist. Kenton Baldwin only had the weeks that Delaney Nottingham spent in Jackson, Tennessee, but their bond and feelings for each other grew during that limited time. When Kent fails to see Laney before she returns to school, it takes five years for him to find out what actually happened to the girl he never forgot and always loved. Laney's return to Jackson was to oversee the renovation of the home that once belonged to her grandparents and was left to her by her father. She had no idea that being back in the small Tennessee town would provide the pieces she didn't know were missing.

This series got off to an okay yet promising start, and Kaylee Ryan has closed it out in the best way possible. Not only do we get Kent and Laney's story, but readers see all the other couples basking in post-HEA bliss. I don't want to give anything away in terms of the story line, especially since the author has made the blurbs for each of the books somewhat cryptic. Suffice it to say that this one had all the feels. Kent was just amazing and Laney's reactions felt real and honest, which I appreciated. This was very bittersweet because as much as I loved everything that this book was, I was sad about having to bid adieu to all the characters in this series. Unexpected Odds was the five-starred ending I'd hoped for and more than satisfactorily received. ❤