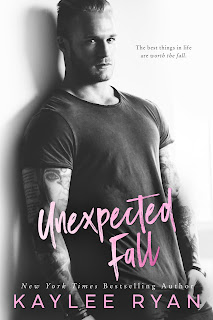 Kaylee Ryan's Unexpected Arrivals is one of those series that grew on me, getting better with each new release. Unexpected Fall is the third novel, and it's my favorite one among the three currently available books. This is the story of Marcus Adams and Dawn Miller, friends who started hooking up which then became more, but a conversation was yet to be had as to what they really were and where their relationship was headed. Dawn already knew how she felt about Mark, but she wasn't entirely sure where Mark's head--and more importantly, his heart--were at. Before any discussion could be had, however, Dawn receives devastating news. Her life changes not just in one instance though, and the last thing she wants is to saddle Mark with all the baggage that's suddenly been thrown her way. But what Dawn doesn't realize is that Mark's all in; he knows that she's more than worth the fall.

Where do I begin with this book?! Gah! I loved Mark and Dawn. Here were two people who were so obviously perfect for each other. There was nothing forced between these two, both of whom had equal amounts of affection and devotion for one another, with emotions that never felt forced upon. My heart broke for Dawn for everything that she was forced to face--and no, I won't mention what those were because I'm trying to keep this free of spoilers--but I admired how she allowed herself to break down and experience the process but still remained focused and strong in spirit. She had a wonderful support system, one that wasn't limited to just Mark either. Speaking of Mark, could a guy get more ideal than him?! Seriously, he was in a class all his own, and he wasn't doing whatever he was doing for Dawn because it was the right thing to do or felt. He was simply a man who loved fiercely and would do anything and everything for the woman who owned his heart. Unexpected Fall was about how love and friendship can withstand even the most heartrending of tragedies. This garners five stars. ♥