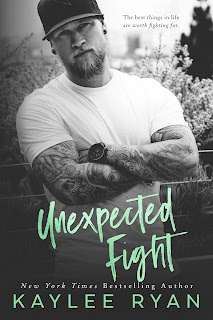 Unexpected Reality was my introduction to Kaylee Ryan's writing back in 2016, and while it was a pretty good read, I confess that it was one of those books that started off amazingly well only to falter in the latter chapters. I've read more from the author over the years, and I've certainly enjoyed most of those books, but when I found out that her next release would be Unexpected Fight, the unexpected--well, at least to me--second book in the Unexpected Arrivals series. Now, when I read Unexpected Reality, it was a standalone, and three years have passed, so I had to refresh my memory a bit as to what the book was about, but I certainly wasn't going to pass up the chance to see what this new book was about and find out what the cast of characters has been up to since the first book ended.

Unexpected Fight is the story of Reagan Beckett and Tyler Justice. Reagan is the younger sister of Ridge Beckett, whose story is told in the series starter, while Tyler is one of Ridge's lifelong best friends. She's had a thing for her brother's best friend for years, but she never really entertained the possibility that anything romantic could ever happen between them. The last thing she wants to do is mess up the dynamic between Tyler and Ridge and risk her own friendship with Tyler. What she doesn't realize, however, is that Tyler's been biding his time until he decides it's finally time to let his feelings be known. They're getting together seems inevitable, but when life throws them a curve ball, Tyler and Reagan will have to be strong in order to win the unexpected fight of a lifetime.

I quite enjoyed Reagan and Tyler's story. This was well-paced and the first half was free from a whole lot of unnecessary drama. The second half, however, did find these two facing one heck of a test, and there were definitely some heartrending moments that had my heart clenching in my chest in empathy for them. Aside from their story, we also see where Ridge and Kendall are in their own relationship, plus we get reacquainted with their close-knit circle of friends which included Mark, Kent, and Seth, who are Tyler's and Ridge's three other best friends, all of whom I'm guessing will get their own books as the series moves forward. Unexpected Fight was certainly a cut above its predecessor, and I shall be keeping an eye out for future books from this series. 4.5 stars. ♥