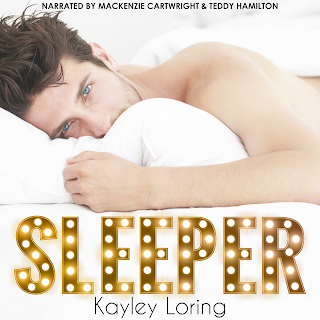 Don't you just love it when you get to re-experience a story you love in a different format and it's even better the second time around? Kayley Loring was one of my favorite author discoveries from last year, and my introduction to her stories was through an audiobook, and I'm so happy that my second listen from her is just as good! I'd originally read Sleeper in December of 2019, and I quite adored it, so when the opportunity to listen to it came along, I jumped right on it. This audiobook is narrated by Teddy Hamilton and Mackenzie Cartwright, the same dynamic duo that narrated my first-ever Loring audio, Back for More, and these two were truly perfectly matched!

Sleeper is a falling-for-your-sibling's-best-friend slash single-parent romance with a Hollywood twist to it. Twenty-eight-year-old actor Shane Miller may have played a wizard when he was younger, but there's no magic potion out there that can help him get enough sleep and take care of his five-year-old twins, Summer and Lucky. His nanny went off to get married, and hiring one isn't all that simple, especially with his ex-wife demanding prior approval from her end. But then his best friend, Nico Todd, recommends his younger sister, twenty-four-year-old Willa, take the nanny position while she concocts original fragrances for her Etsy store. This is the perfect setup for everyone concerned. Now, if only Willa could stop herself from acting on her old teenage crush on her brother's best friend.

I may now be a wee bit addicted to Kayley Loring's audiobooks! Gah! It looks like I'm going to have to tap into my cache of Audible credits if this keeps up so I can get my greedy ears on her back list. Sleeper was an awesome audiobook to listen to, and Teddy Hamilton and Mackenzie Cartwright did justice to the wonderfully hilarious and scintillating story that this author penned. Shane and Willa were the sort of fictional romance couple that you simply can't resist falling in love with, and that love extends to the winsome twosome that was Summer and Lucky. Then there was Nico, Willa's older brother, and while I know his story is next, I can't help but get excited for the audiobook edition of that one as well. If you're looking for a rom-com with lots of heart and humor to it, especially with everything going on in the real world recently, find your perfect with Sleeper. This gets five-plus stars. 🖤