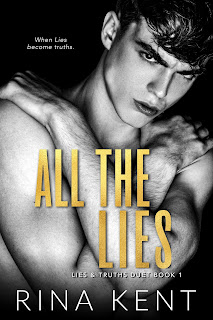 Oh wow. That was... Wow. No words. Except wow. Rina Kent was a new-to-me author going into All the Lies, and now I wonder where the heck she's been all this time and how I could have missed out on her previous books?! Well, lesson learned this first book in Kent's Lies & Truths duet has left quite an impression on me. We're introduced to Reina Ellis, a twenty-year-old young woman who has the world at her feet and on a string. She's the envy of many and has a life others can only dream of...except she doesn't remember any of it. And now there's someone named Asher Carson. He claims to be Reina's fiancé, and one look at him and you know that they'd make the perfect pair. But he doesn't look at his future bride with love in his eyes. Instead they're full of hate. He says he'll break her and make her pay for what she did...except she has no memory of it. Not that Asher cares one bit...

I've seen quite a few reviews that recommend that you go into this blind, and I tend to agree, although the blurb doesn't really give much of anything away. The author gives readers fair warning about this not being a standalone as well as Asher not being your typical hero. So yes, this ends in a cliffhanger--and it's a humdinger!--and Asher is very much someone who doesn't really open himself to scrutiny. Even if you think you've figured one thing out, trust me, there's a whole lot more than will be up in the air by the time you get to the end. Again, this is a duet, so the cliffhanger part is to be expected. Not to worry since the conclusion is only a couple of weeks away, so we can all try to be patient. I know, I know. Easier said than done because I need book two ASAP! Five stars for All the Lies. ♥

Purchase All the Lies on Amazon.