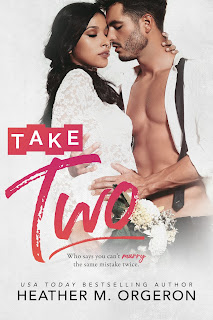 Whenever I have a Heather M. Orgeron novel in my e-reader, I know I'm going to be happily entertained for a couple or so hours. I swear, she's yet to write anything that's left me disappointed, and yes, I've read all her books, so I should know. Her latest novel is a romantic comedy standalone that has a formerly married couple who also happen to be co-parents granting their only child's twelfth birthday wish. So, when Nya Perez wakes up in Vegas and finds herself dressed in a wedding gown and in bed beside Liam Watts, she's aghast. They'd been divorced for nearly a decade, so learning that her ex-husband is no longer an ex, she has difficulty wrapping her mind around it. This man broke her heart, and broke it badly. Sure, they've managed to become good friends again, and they work hard to be the best parents to their daughter, Ellie, but that didn't mean she was the least bit interested in being spouses again. So why the heck did she even suggest it in the first place? Yeah, she may have been drunk, but Liam should've never taken her up on it. However, this is the second chance that he's been waiting for to win Nya back.

Take Two is a second-chance romance involving former spouses, and it had a lot of that humor that I've come to expect from Heather M. Orgeron. Nya and Liam certainly had that connection, and their interactions with one another provided a lot of the hilarity, especially since Nya was so resistant to them being a married couple and living in the same house again and Liam had a bad habit of pushing Nya a tad too far and oversharing, well, everything. You can pretty much see why the fell in love in the first place back when they were still in college, but you also see why they split up, with missteps here and there meshed in with them trying to find their footing in this second marital go-around. For the most part, I found the book enjoyable, but I confess that there were moments where I was frustrated with these two main characters. There was a lack of communication, with Liam making decisions without discussing them with Nya, and then there was bull-headedness from Nya and how refused to budge and it was Liam who had to make most of the adjustments. Still, Take Two was four-starred read. ♥