Review: That Night by K.I. Lynn 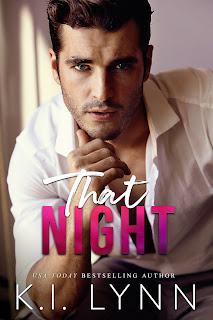 K.I. Lynn is back with her first new offering in 2020, and it's a hot read with a whole lot of heart to boot. That Night is the story of twenty-eight-year-old Natasha Cates and thirty-six-year-old Richard Bennett. Along with their respective friends, the two plan on ringing in the year in Vegas, but one spilled drink and one unforgettable night later, they're smitten with each other. They need to go their separate ways--him back to Chicago and her back to Indianapolis, but leave with Richard getting Natasha's number and promises to get in touch. Six weeks and no calls or text messages later, Natasha discovers that she's pregnant. With an important meeting with the VP of Finance, she needs to put bouts of morning sickness on the back burner, but it turns out that she's got herself a mini-reunion with Richard--as in Richard Bennett, VP of Finance. Neither one had a clue that they both worked for the same company, albeit in different locations, and now he's just learned she's pregnant. Hashtag this "complicated"!

Ah, but how K.I. Lynn satisfies my need for the sort of read that doesn't skimp on heat or heart and always gives a well-developed story with the most interesting of characters. I adored Natasha! This is a woman who knows what she wants and goes after it. She's like the complete package, but that doesn't mean she's perfect. She makes her share of missteps, but nothing is done with malice. She was exactly who Richard needed in his life, if only he would trust in what they had. And Richard was, well, a man with issues. He was a workaholic many times over and he knows all too well what it's like to be betrayed, not just once but twice! So yeah, you can imagine the roadblocks that these two were going to have to face. Admittedly, there were a number of times that I wish I could give Richard a good talking to and make him see that he was going to wreak havoc on his relationship with Natasha, but hey, all that conflict is part of the story, right, and I loved it to bits. I'm giving That Night five stars out of five stars. ♥