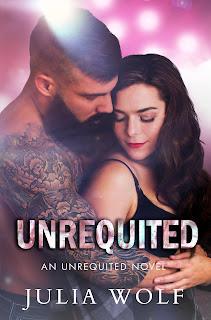 I so love it when the female main character is unapologetically beautiful, brainy, and a badass. Unrequited, which is both the first book in the series by the same title AND my first read from Julia Wolf, is a second chance romance with a rock star feel to it. Maeve O'Day may have been born to a mother who was the epitome of a Southern belle, but Maeve was a rebel at heart with rock music thrumming through her veins. She walked to the beat of a different drum, with her wielding the sticks that beat against the skins. When the opportunity of a lifetime comes along for her to showcase her prowess as a drummer, she knew she had to take it, even if it meant becoming part of the same band as the guy who broke her heart half a decade ago. She was only eighteen when a then-twenty-five-year-old Santiago Garza shattered her heart, but if being part of Unrequited means tolerating their bassist's presence, then so be it. He may not want her in the band, but tough luck because the band needs her. This is her chance to make a go of a career in music, and no one, especially not Santiago Garza or their past, will stop her rise.

I absolutely adored Maeve! For me to say that the female main character in a book is more of a standout than her male counterpart isn't as usual as I wish it were, but Maeve was head and shoulders above anyone else in the book. She was that great combination of sass and sweet and didn't need any guy to swoop in and rescue her from whomever or whatever. The fact that she was a talented drummer further endeared her to me because I so wanted to learn how to play the drums when I was a kid (inspired by both Karen Carpenter who was the first female I'd ever seen behind a kit, but my parents nixed that idea because of the noise they felt drumming would cause). Another plus was that she was curvy and not the typical slim body type with blonde hair and blue eyes that you'd often find in these books. I know I sound like I'm crushing on Maeve, and maybe I am because hello, the romance world needs more "real" heroines out there. As for Santiago, well, let's just say that the guy had to work really hard to win Maeve AND me over, which he eventually did. Unrequited snags 4.5 stars. Now, I need book two! ♥