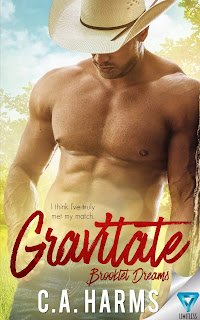 Gravitate is the third novel in C.A. Harms's Brooklet Dreams series, and it lived up to my expectations of it. Twenty-two-year-old Chloe Rigdon has had a crush on her cousin's best friend for a while, but when twenty-seven Landon Layne rejects her after she propositions him, making it worse by calling her "kid", she decides avoidance is her only saving grace. Landon has no clue why Chloe seems to run the other way whenever she sees him, and when he learns why, he knows he needs to clarify a thing or two. He would love nothing more than to be worthy of a girl like Chloe, and when he realizes that now is as good a time as any, he can only hope that his friendship with her cousin, their five-year age difference, her protective family and friends, and his kinda-sorta-maybe ex won't get in his way.

This was an easy read, and one that I rather enjoyed. What began as a misunderstanding turns out to be the push that Landon needed to finally act on his attraction to his best friend's cousin. Naturally, he had his work cut out for him, what with Chloe's feelings being hurt and her actively avoiding him. There isn't a whole lot of drama that goes on, making for a fairly lighthearted read. Even when they finally get together, nothing comes easily, which ensures that these two will have to fight for their feelings for each other. After all, if they want a future, they're going to have to claim it for themselves and not allow circumstances and stalker-like exes get in their way. It was also fun having the other couples from the two previous Brooklet Dreams and the other characters from the Southern Boys series here and catching up with them. You can easily read Gravitate as a standalone, which I'm giving four stars to. ♥