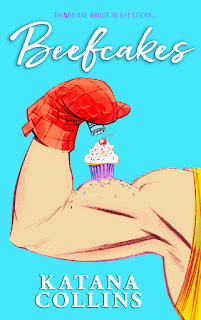 Beefcakes marks my second-ever read from Katana Collins, the first being Callback (Silhouette Studios book one), although I do have her Harrison Street Crew series and Blind Spot somewhere on my Kindle app. This new release is feels like a crossover novel, what with it being set in Maple Grove, New Hampshire, which is where Collins's Maple Grove series is set, and there are appearances from characters in her Silhouette Studious series. However, Beefcakes works wonderfully well as a standalone, and you can definitely dive in without having read any of the other books in either aforementioned series and still enjoy this second-chance romantic comedy from this author to the fullest. I will, however, will be checking out both of those series and discover what I've been missing.

It's been ten years since Neil Evans left his small New Hampshire town of Maple Grove right before high school graduation without saying goodbye to any of his siblings or the girl he spent all his time with. With his mother's cancer diagnosis, he packs up his life in Los Angeles, California to help manage things in the bakery she started from scratch, The Maple Grove Cupcakery, alongside one of his brothers. He knows his three siblings feel like he abandoned them, and he knows his disappearance and rare return visits didn't exactly endear him to the rest of the town. However, it's Elaina Dyker he hopes to make amends with, but her obvious disdain for him makes it clear he has his work cut out for him. Will being together on a reality show help him win over the woman who will always be his Lainey and help them a much needed million dollars to boot or will she tell this beefcake to beat it?

This was exactly the kind of book I needed to get lost in during this whole COVID-19 pandemic that has found countless of us stuck at home. I loved the humor and the romance and appreciated the fact that Elaina didn't go the forgive-and-forget-in-a-few-minutes route. Yeah, I'm a fan of groveling, or at the very least, seeing that the other party has some semblance of remorse or regret for what they did that led to the break-up. Thankfully, Neil was a really good guy, and while he may have been a "beefcake", the man was a talented baker who used to be a title-wearing bodybuilder turned stuntman that loved his family and still harbored feelings for his ex, aka Elaina. Katana Collins didn't waste time on overly long moments of potential conflict, and I liked that she took me by surprise with that and the direction the story took time and again. Beefcakes is listed as the fourth Maple Grove book, but it felt more like a spin-off. I actually hope it's the start of a spin-off series and we get books featuring Neil's three younger siblings, Liam, Addison, and Finn, as well as Elaina's younger sister, Chloe. Five stars! ♥