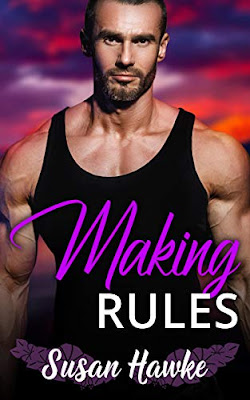 About Making Rules
Davey’s Rule #53: Daddy shouldn’t be afraid to let his boy top.
Before Davey came to work at Daddy’s Lap and began that crazy list of rules, his future bestie, Sammy, was already living happily ever after with his own Daddy-dom. From the moment they met over a gas pump to the day they were legally able to wed, leather Daddy Raphael Robustelli adored his linebacker-sized boy. This is their love story, as seen through a series of six short vignettes. Witness the moment they met, see the first time Davey came to the club, and so much more. This is a short 20k volume, filled with emotion and backstory for the entire series.


NOTE: This is not a full-length book and does not contain a new couple. This can be read as a standalone but will be most enjoyed by those who have read the series.


This is the sixth book in a series about not-so-perfect Daddies, adorable “boys,” and one sassy brat with an insane list of rules. Grab your fan and tissues because this series comes with both a high heat advisory and all the squishy feels you’d want from a Susan Hawke book. 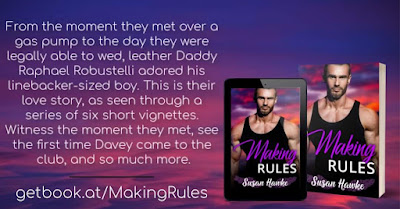 An Excerpt from Making Rules
Leaning against my truck bed while the gas pumped, I frowned at my phone in irritation when I got the text. I couldn’t believe the jerk was canceling the first date I’d had in forever. I didn’t care as much about not going out with the guy, but I’d switched shifts to accommodate his schedule. I loved working as a trainer, but I preferred the morning crowd. The night crowd tended to be more of a meat market than people actually looking to get fit.

“Bad news?” I glanced up at the sound of a gruff voice. The hottest man I’d ever seen was on the other side of the pump, holding the nozzle to the front of his Harley. When I didn’t answer, he held up a hand with a chagrined look. “Sorry. Too nosy for my own good, I suppose. It just seems a shame to see a frown on such a pretty face.”

Pretty face? The hell? I wasn’t offended so much as surprised to hear a tough-looking guy in leather call me that. Usually, those were the kind of men who’d knock a guy out if they even smelled a hint of gay on him. This guy, though… he was checking me out, and I didn't hate it.

I took a moment to look him up and down. Damn. He wasn’t one who would ever be called pretty. Sexy, hot, gorgeous… maybe even a little scary in a good way. Hell, yeah. He was at least an inch or two taller than my own six foot four and possibly even had me beat in weight and bulk, which was saying a lot.

But yet… I wasn’t afraid of him. I sensed a gentleness about him, although maybe that was just because he’d called me pretty. I realized I’d been staring too long and faked a cough before I rambled out an info dump that was way too much information to share with a random stranger, let alone some biker who was eyeing me like candy. “

Ah, um… no, not bad news. My date for tomorrow just canceled on me, but I wasn’t invested, so it’s cool. It would’ve been fun to go out, but whatever. No, I just wished I hadn’t switched my shifts at work for tomorrow. I hate the jerks who come in at night. That's why I work days. But my date could only meet during the time I’d normally be working. Annnd I’m talking too much. Sorry. Careful, next I’ll be telling you about how I got bullied in high school. Which is probably related directly to why I hate the jerks on the night shift at work. Stupid meatheads.”

White teeth gleamed as he threw his head back to laugh. “You’re too much. I love it. Don’t apologize for opening up. I’m fascinated.” He pulled the nozzle out of his tank and went about finishing up while he talked. “Let me see if I can get this right.” 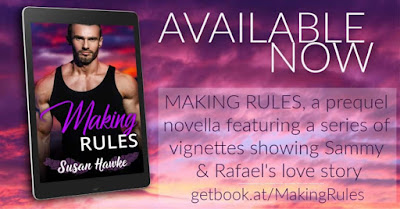