Review: Out on the Ice by Lane Hayes (Out in College #5) 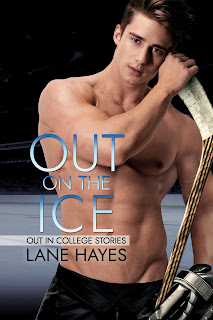 “Yours,” he repeated in a kind of daze.


Oh, this series! Lane Hayes's Leaning Into series has long been my favorite among all her series, but I confess that her Out in College series is quickly catching up. I love that the series is composed of standalones that are loosely tied together, and with this fifth book, I've found yet another favorite in the bunch. Out on the Ice is the latest novel, and it's a sorta-kinda-maybe enemies crushing on each other who end up becoming friends and then lovers. If you're familiar with the series and have read the previous books, then you should recognize Sky Jameson, who was a supporting character in Out in the Offense and Out in the Field, books three and four, respectively. You don't necessarily need to read either of those books in order to fully understand what's happening in this newest one, BUT if you're curious about the back story regarding Sky's previous relationship, then make sure to check them out.

Hockey has been the main focus of twenty-two-year-old Colby Fischer's life for years. He once dreamed of making it all the way to the professional league, but now in his senior year, he knows his options as far as that goes may be dwindling. He may not be the next Wayne Gretzky, but his heart belongs to the sport, and he sure as heck doesn't want to end up working as an accountant for his stepfather's firm. He's okay with being there part-time since it's still summer and hockey season hasn't started yet, which is why he's been tasked to train the new intern who'll take over his duties. Colby never expected it to be Sky Jameson, the twenty-three-year-old baseball player from Chilton taking summer courses in Long Beach State. The same Sky that Colby hates...and has a crush on. Which is totally weirding Colby out because he's straight and has always been straight. So, why can't Colby stop thinking about Sky?

I was absolutely smitten with Colby and Sky! These two had this sizzle between them from the moment they clocked each other's presence. After everything that went down with his ex-roommate and his ex-boyfriend in the third and fourth books in the series, I was a wee bit wary of Sky, but he totally won me over here! His back story and getting his side of how his relationships with Max ended gave me a better understanding of the sort of person Sky was. Colby was such a revelation, especially given that I wasn't sure about him in the first couple of chapters. These two gave me no other choice but to fall in love with them. Kudos to Lane Hayes because she took me by surprise with the direction she chose to take the characters and their story. There was some angst and some humor and a whole lot of sweet alongside the steam. Sky and Colby now own a piece of my heart and I can't wait for more from this fab series. Maybe Elliot next, yes? Five-plus stars go to Out on the Ice. 🖤

Purchase Out on the Ice on Amazon.