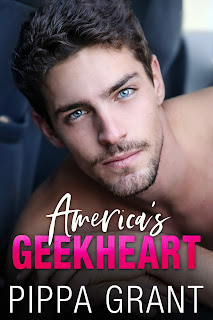 I called her. You can't have her. You snooze, you lose. I licked her. She's mine now.

It's more like I'm basically going to spend the rest of my life as putty in her hands, because holy fuck, she's everything.


From the moment Beckett Ryder sent the tweet that was supposed to be a direct message (DM) addressed to his younger sister who ended up falling in love with his best friend, life as he knew it changed forever. He never quite expected the level of hate on and off social media he'd get, however, so maybe apologizing to his sister's neighbor will fix things in...or not. It's difficult to slip that apology in once you've been tased, but that doesn't mean Beck didn't notice Sarah Dempsey. The woman makes it clear her opinion of him isn't all that high, but he needs to get her to agree to a plan that will help restore order in his world. He's more than willing to assist her in bringing more attention to the plight of giraffes, honey bees, and whatever else her heart fancies. All they have to do is pretend to be seen together as a couple, and well, Sarah's prepared to do what she has to for her love of her causes, even if it means losing her much-coveted privacy. What neither of them--or everyone else--was really ready for was for the former boy band member turned fashion mogul and the geeky environmental engineer with a secret to actually start falling for one another.

A faux pas on social media leading to a serendipitous--you'll get it if you've read the book--happy ending? I absolutely and indubitably adored America's Geekheart! I seriously liked its predecessor, Flirting with the Frenemy, but Pippa Grant took things up a couple of notches with this second book in her Bro Code series. On paper, Beck and Sarah were as different as night and day, but I reveled in not just discovering which similarities they did share but also in seeing them connect more and more as they got to know each other and realize that they simply belonged together. As much as there were some honest-to-goodness, toe-curling "le sigh" moments, there was a whole lot of comedic turns that had me either giggling or flat-out snort-laughing. This novel epitomizes what a romantic comedy read should be. I've read more than my fair share of rom-coms, and this just ticked all of my boxes and then some. Beck and Sarah were an awesome pair to lead a pack of hilariously unforgettable supporting players. You know how there's a saying that starts off with "it takes a village"? It took one author's amazing writing plus a slew of fantastic characters, and a very quirky love story to make America's Geekheart the fabulous, five-plus-starred romance that it is. ♥