Review: Flirting with the Frenemy by Pippa Grant (Bro Code #1) 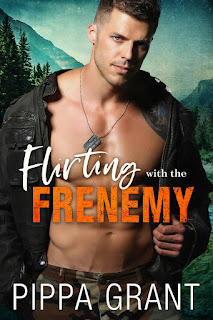 Flirting with the Enemy is only my third Pippa Grant read--Rockaway Bride and her co-authored Hosed being my first two--and it's becoming clear that I've missed out on some awesome writing having not (YET!) read Grant's previous releases. This first in a new series entitled Bro Code had all that great enemies-to-lovers tension that the trope requires but it isn't the put-on sort. The main characters didn't have a whole lot of love lost between them growing up, no thanks to "pushing each other's buttons" becoming so ingrained in them that it's what their enemyship is all about. That is, until the night before Christmas finds Eleanor Ryder and Wyatt Morgan together and indulging in things enemies shouldn't be indulging in. He says it's a mistake, one that results in a nightmare of an aftermath and six months of her ignoring his existence. And then they find themselves staying in Ellie's brother's--aka Wyatt's best friend--house during the same week. She's in Shipwreck, Virginia for her best friend's wedding, and he's there spending his leave with his seven-year-old son, Tucker. It should be a disaster in the making, but maybe, just maybe, close quarters and more time together could be the start of something...like love.

Color me entertained and smitten and emotionally invested! I was absolutely taken with Ellie and Wyatt and their love-hate relationship. Pippa Grant crafted the right combo of romance and comedy and a cast of characters that dished zingers as well as they served up nuggets of angst. Who could resist all that packaged with on-point writing? Certainly not I! We learn that Ellie and Wyatt haven't exactly been all that nice to each other since they were kids, and maybe it was understandable before since he's three years older than her and he saw her as nothing more than his best friend's annoying little sister who tried to one-up the rest of them. But then the layers are peeled back, and there's this begrudging affection that lingers between them--maybe more on his part than hers when they were younger but still--and then there's the whole issue of the "bro code" but I was pleasantly surprised that it didn't factor in as much as it usually does in books that have the whole falling-for-my-best-friend's-sibling vibe going on. This book made me laugh and it also made my heart squeeze in empathy for both Ellie and Wyatt and their circumstances. Five stars for Flirting with the Frenemy and has me excited for the rest of the series! ♥

Purchase Flirting with the Frenemy on Amazon.