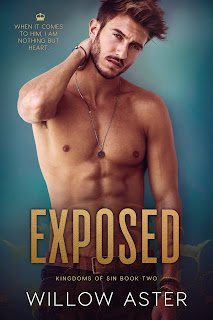 Exposed is the second book in Willow Aster's Kingdoms of Sin series and follows the story of Elias Lancaster and Mara Catano. With both characters having been part of the series starter, Downfall, and with characters from there recurring, I'm going to recommend you read both books in order. I know a lot of authors prefer to promote their books as standalones, even if they happen to be part of a series, but experience has taught me that when a book is connected in one way or another to books before it, reading them in order is best. But hey, maybe that's just me.

Elias Lancaster isn't just best friends with the King of Niaps, he also happens to be the new king's most trusted adviser. As if his life weren't complicated enough, Elias has to deal with being around Mara Catano, also known as Princess Mara, King Luka's sister and the one girl Elias has always had feelings for but could never pursue. Mara has made it clear that she wants to spend the rest of her life with Elias, but he's made it clear that being more than friends would be a bad idea. Mara is done with waiting for Elias to make his move. It's time to make one last push.

With Mara making the impression that she did in the first book, I wasn't exactly a huge fan of hers. It took a good, long while, but I did manage to warm up to her,  especially since her main motivation for doing the things she did was love and concern for those who meant the most for her. Elias was complicated, but I loved getting to know him better and seeing him open himself up to actually to having his own chance at happiness with Mara. Exposed turned out to be a fun read, and it easily gets four stars. I look forward to reading the third book, Ruin, this March. ♥