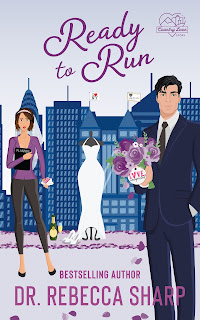 There is much to adore about Rebecca Sharp's newest novel! Ready to Run is the second novel in Sharp's Country Love series, and it's certainly lived up to the expectations set by its predecessor, Tequila. Book two--which can be comfortably read as a standalone--is the story of a three-time runaway bride turned wedding planner and a divorced billionaire slash father of the bride. Dixie Dorothea Winston has been engaged to be married thrice, and each time, there was a reason she chose to walk away rather than walk down the aisle. Now thirty-one, she's become the most sought-after wedding planner in Manhattan thanks to her Winston Weddings by Thea Winston business. She's used to wrangling bridezillas and anxious mothers-of-the-bride, but her latest client is unlike anyone else she's ever catered to. Oliver Kingsley's only daughter is getting married and he wants nothing more than for her to have a wedding to remember. With his daughter missing one appointment after another, it's the thirty-eight-year-old billionaire that Thea finds herself spending more time with. Soon enough, Thea finds herself falling for Oliver, but being in love is one thing; getting married could be the only thing that will send her running...

This was such a fun read, and it definitely wrapped up my weekend on a high note. Both Thea and Oliver were main characters who were easy to get behind. They were easily likable and their story was lighthearted with a dash of angst thrown in, enough to satisfy even an angst addict like me. Now, let me just point out that Thea did have reasons for not pushing through with those three weddings of hers when she was younger. I honestly think it was better to not have gone on with any of them than forced the issue just to save face. Unfortunately, as warranted as her being a "runaway" bride may have been thrice over, it does create certain mindset. But then along came Oliver, who already earns immediate bonus points because of his first name. I loved that he adored his daughter, Jillian, as much as he did, wanting nothing more than for her to be happy. He was protective and doting and made him even more appealing as a male main character. The chemistry between Thea and Oliver was spot-on, and I thoroughly enjoyed getting to know them and seeing them get their HEA. While I may have had my struggles with my earlier reads from the author, her Country Love series has easily become a favorite of mine. Five stars go to Ready to Run. ♥

Purchase Ready to Run on Amazon.