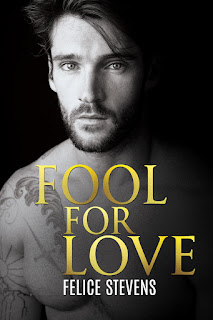 Fool for Love is the first novel in Felice Stevens's Lost in New York series, which is a spin-off of her Rock Bottom series. If you've read the aforementioned previous series, you may recognize Presley Dawson from Running from My Heart, which was the third book. You don't necessarily need to read it in order to fully understand or enjoy this new release; however, I'm still going to highly recommend you check it out because I consider it one of the best from this author. Back to this series starter--Presley Dawson is in his mid-thirties and the owner of an antique store. It's been six years since he lost his lover--his married lover who also happened to be a father to a four-year-old son. Press's life has been on-hold ever since, which leads his best friend to encourage him to join a grief support group. There, Press meets a handsome lawyer, and the draw Press feels has him captivated yet cautious.

Nathaniel Sherman is a lawyer in his late thirties who decides to give in to the demands of his family to attend a meeting with a support group focused on those who have lost someone in their lives. Nate's father passed away three years prior, and it was a loss made worse by the fact that the man died of a heart attack in his mistress's bed--a mistress who just happened to be Nate's mother's best friend. Since then, Nate hasn't had a good night's sleep, but while he attends the Lost in New York's meeting to appease his family's concerns, he doesn't hold out much hope it'll help. But he's immediately captivated by a shy and unassuming antique shop owner. Nate's never been one to be in a relationship, but he wants to try with Presley. The two men build slowly but surely towards something meaningful, but will Nate feel like a fool when he learns all about Press's affair with a married man?

This was such a strong beginning to a new series! Felice Stevens is an author who almost always has angst in her stories, and she incorporates that angst well. It goes without saying that Press's decision to keep his circumstances a secret was going to be the main point of conflict between him and Nate later on in the book, and I appreciated the manner in which Stevens chose to have it all unfold. There was a hesitancy on my part in the first few chapters when it came to the main characters, what with the very little I knew about them. However, the more the layers were peeled away, the more I liked these two. They were imperfect people who had made mistakes but it was how they were able to make amends and work towards being better that made them worthy of a happy ending. Snaps for Press's bestie, Frisco Martinelli, for being awesome in chapter twenty-two. I'm giving 4.5 stars to Fool for Love. ♥

Purchase Fool for Love on Amazon.