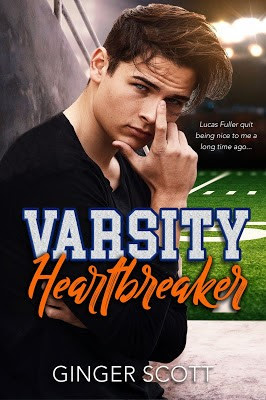 About Varsity Heartbreaker
Lucas Fuller is a lot of things.
He’s the boy next door.
He’s the first crush I ever had.
He was my first kiss.
He’s also the only person who has ever broken my heart.

For two years, I’ve wondered what happened to the us I used to know.
We were best friends, and then suddenly…we weren’t.
I tried to run away from it. I even changed schools just to make the hurt disappear.
But no matter how hard I tried to not think about Lucas, I just couldn’t stay away from the high school quarterback with perfect blue eyes and so many secrets.

I’m back. We’re seniors now. We’ve grown—all of us. And Lucas Fuller might be different, but I’m different too. This is my time to take risks, to experience life and to fall in love for real.

I want Lucas Fuller to be a part of my story, but I know for that to happen, I need to know the truth about our past. 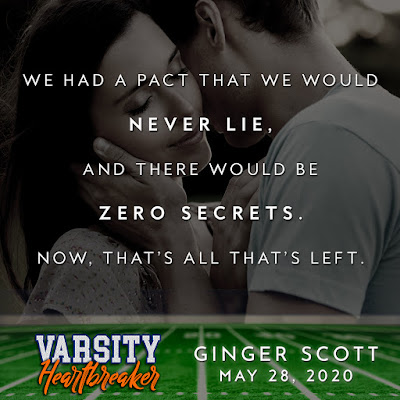 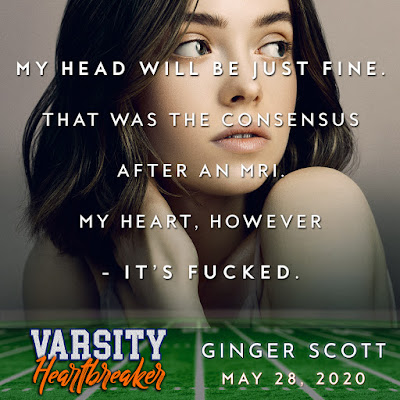 An Excerpt from Varsity Heartbreaker
There’s a camera crew on the field—a real one, not our student-run Internet show. They’ve positioned camera guys on either side of the banner being stretched out by a tower of cheerleaders. When the team trickles out, everyone in the student section—which has basically grown to be two-thirds of the stands—gets on their feet to scream. Abby is standing in front of me and she turns, catches me not doing my part, and points in that threatening way she has.

“Fine,” I mouth, cupping my hands around my lips and shouting, “Go Eagles!” as loud as I can. The sheer volume of my own voice, the togetherness of this moment, all of it—it infects me. My smile quits being pretend, and I get caught up in my role. I have a part to play, albeit probably not as important as everyone thinks, but for the next three hours, I will be a superfan. For the next three hours, nothing matters more than winning this game and destroying some school from South Bend.

The young men on the field shout in unison, growling with testosterone and pounding into each other, smacking helmets to helmets and gripping at facemasks to amp up their game faces. They explode through the banner, confetti covering the corner of the field as it’s fired from a few cannons held by some of our cheerleaders. Lucas is the first to break through, holding an American flag as he sprints straight down the center of the field, his co-captains running behind him with two Eagles flags.

He was so much younger the last time I saw him run like this. He was a leader that seemed too small to lead, but now—now he’s the guy with the V that cuts down his abs and whose arms completely fill out the sleeves of his jersey; whose neck doesn’t seem so pencil-thin anymore. His sweaty hair is swept to either side, and the black lines swiped under his eyes somehow make him seem like this superhero.

A hero who abandoned me when he got popular and when my life fell to shit, I remind myself.

The team captains are met by one of the coaches at the fifty-yard line. He takes their flags to fold them while the boys huddle up to pray. It’s such a blatant disregard for the separation of church and state, yet it seems nothing could be more important than this bonding happening in front of us all. More than the quiet power of the moment, though, is that Lucas is the one leading the prayer. Arms over shoulders, circles standing within circles, these boys who I’ve seen do the most unchristian-like things give respect to his words. I wish I could hear him or be close enough to read his lips. Some of the boys look up to the sky, a few of them holding their helmets high while their heads lower. Lucas’s eyes are closed, and there’s an innocence in his features, that much I can see from here. They all start clapping and an echoing “Amen” accompanies their formation of a tighter circle until the clapping becomes thunder and soon . . . fuel.

Lucas is the last to walk away from this private spot on the field. His head down, I recognize the familiar invisible weight on his shoulders. Even as kids, he always felt so damn responsible for everything and everyone. Especially for me. He rode his bike through rain to sneak me my favorite candy bar when my parents were fighting downstairs. And he insisted we fall asleep still on our phone call to each other if I felt scared or off. He sensed things when I didn’t share. He took burdens from me, whether I wanted him to or not, and shouldered them until he was sure my smile was real again.

I miss him. I miss him so fucking much.

I press my palms into my eyes while my friends aren’t looking, and manage to stop myself from feeling all of this somewhere so public. In less than a minute, the game takes over and distracts me from anything other than the anticipation and hope that brews in my belly every time Lucas throws the ball. He’s gotten better. I understand why his opportunity window is so big. There’s an easiness to the way he moves, and it’s more than instinct. He has plenty of that, though, after throwing the ball down our street to his dad every night—a million which ways and for hours on end. They haven’t thrown since freshman year, but that’s probably because Lucas has outgrown what his dad can give him. 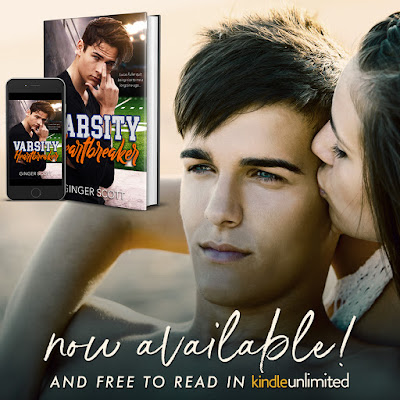 Ginger Scott is an Amazon-bestselling, Goodreads Choice, and RITA Award-nominated author from Peoria, Arizona. She is the author several young and new adult romances, including bestsellers Cry Baby, The Hard Count, A Boy Like You, This Is Falling and Wild Reckless 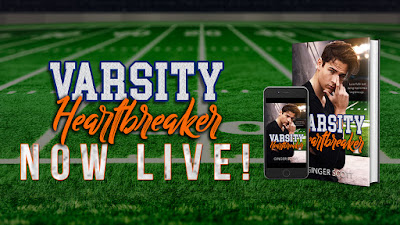