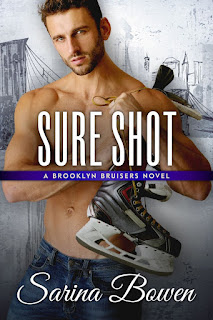 “I can't stay away from you. I don't even want to try. Maybe you're embarrassed to be seen with a bitter, rebounding hockey player with anger issues and a shitty reputation. You probably deserve better. But I'm a greedy asshole. And I meant it when I said you're the best thing to happen to me in a long time.”


Oh, my heart. I so wasn't expecting for this seventh Brooklyn Bruisers novel to get to me the way that it did. I needed a couple of tissues at one particular point, and when I did manage to keep my tears at bay at other parts, I could still feel my heart clenching in my chest from empathy. Goodness, but how Sarina Bowen made me go all in for Bess Beringer and Mark Tankiewicz. This had all the feels. All. The. FEELS! Le sigh. Dare I say that Sure Shot is one of Bowen's best, and that's saying something considering I can't think of a single one of her titles that didn't pass muster as far as I was concerned? While a standalone, I highly recommend that you check out the rest of the books in the series because there are recurring characters galore, and not just from this series but the author's True North series (specifically, Bountiful, which features Bess's older brother and retired hockey player, Dave) and the Company series (particularly, Moonlighter, which is about Bess's newest--and only--employee and former hockey player, Eric Bayer). All that being said, you can still feel free to dive into this one without reading the others.

Sure Shot is book seven in the Brooklyn Bruisers series, and it's all about a sports agent and a recently traded veteran hockey player. Bess Beringer is turning thirty soon, and with that milestone birthday on the horizon, she knew it was time to make some changes. So, she comes up with a five-year plan, one that's focused on her personal life since her career is a dream that continues to come true. But you know what they say about well-laid plans, and Bess's is about to go awry when she realizes who the newly traded player to the Brooklyn Bruisers--a team where she's got a number of clients--happens to be: Mark Tankiewicz. Nine years ago, Tank was the rookie player for New York and Bess was the rookie agent for Henry Kassman and Associates. At twenty-three, Tank was cocky, hot, and talented, and nine years later, he's more than proven his worth on the ice and is even more drool-worthy. The trade from Dallas to Brooklyn has him on edge and more than wary. He knows his new teammates don't like him, not when he was the reason Dallas cost Brooklyn the Cup the year before, and rumors are swirling as to why he was traded and why his wife isn't with him. The silver lining, though, comes in the form of the girl he met on her twenty-first birthday--Bess Beringer, and she's exactly what he needs. But is Tank who Bess needs, too?

Ah, where do I even begin with this book? There was so much more to both Bess and Mark than two people who once spent three months together as casual lovers who shared a strong connection and then would go on to garner a great deal of success in their respective fields. Experiences in their past--more recent ones on Mark's end--have affected them deeply, leading them to make certain choices that could impact any chance of a future they have together. I loved seeing how they developed as a couple and evolved as individuals, celebrating their similarities and coming to terms with their differences, making adjustments and changes in the process, but not because there was no other choice, but because there were choices available. There were moments where I felt my emotions getting the better of me, but there was one particular point where the tears spilled over, and it was between Bess and her brother, Dave. Of course, there were a slew of lighter scenes that played out, as well as the expected sweet and steamy ones, and all of it made for a remarkable read, one that ranks as one of my top reads of 2020. Sure Shot is just the latest reason why Sarina Bowen's Brooklyn Bruisers is such a favorite. Five-plus stars. ♥