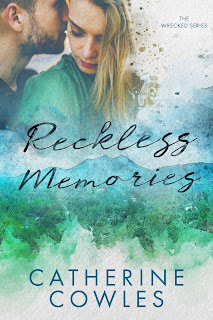 Like the Sutter Lake series before it, Catherine Cowles new Wrecked series's first novel is a spin-off of the author's debut standalone, Further to Fall. Ironically, the aforementioned title was my first purchase from the author's list of published work but it's also the only one I have yet to read. Sad but true. I swear it's on my to-be-read list; I just need more time to read it (and every other single title on that too-long list). Having said that, Reckless Memories can be read as a standalone, so you don't necessarily need to read Further to Fall prior to this in order to fully enjoy book one.

Isabelle Kipton was only sixteen when her world changed forever, and the one person she needed most was nowhere to be seen. It's been eleven years since she last saw Ford Hardy, who was eighteen when he left their hometown of Anchor, Washington behind, which meant leaving her and his family as well. Now, he's back, hoping there's still time for him to bring The Catch, the Hardy family-owned bar and restaurant, back into the black and making a profit going forward. He's kept his distance all this time, but this could be Bell and Ford's chance to restart their abruptly cut friendship...and maybe become more. But someone isn't happy with this reunion.

Catherine Cowles has taken things up a notch with this new series starter, setting the bar high for all the other books to come. Funnily enough, I already had high expectations given that I liked Cowles's previous series. Welp, consider those expectations not just met but surpassed. The angst is high--YAY!--and the happily-ever-after shared by Bell and Ford is a hard-fought one, but goodness, I was all in and rightly so because this was a well-written story with a well-conceived plot and characters that I cheered on. The romance was great and had that element of suspense that made it even more appetizing a read. Five stars for Reckless Memories.