Review: BTW: By the Way by Lucy Lennox & Molly Maddox (After Oscar #3) 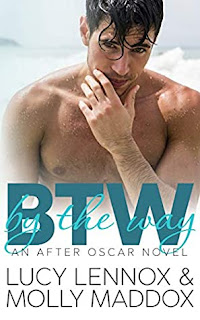 It's been over a year since Lucy Lennox and Molly Maddox released the second After Oscar novel, but now, the wait is over! BTW: By the Way is the third and latest book, and dare I say that it's my favorite of the lot so far? I adored this story of two men who shared an instant connection only to find out that they were actually adversaries, one needing to protect his family's legacy, the other wanting the property for his prized client. Like the two previous books, this can be read as a standalone, but I'm highly recommending that you read them in order because there are recurring characters and each book has turned out to be a wholly enjoyable and fantastic read.

BTW: By the Way is all about Sawyer Gilley and James Allen. Sawyer is a twenty-six-year-old lifelong resident of McBride, Massachusetts working as a bartender and part owner of the Sea Sprite, an inn that's been in the Gilley family for generations. He's dreamed of giving the inn a much needed makeover, but dreams cost money, and that's something Sawyer and his family are in short supply of. When he meets thirty-eight-year-old James Allen, he's a distraction that Sawyer welcomes wholeheartedly...that is, until he realizes that James is none other than the lawyer representing the man who wants to buy the Sea Spirit and demolish it in order to build a fancy resort in its place. James came to McBride to do a job, but can he still do that without breaking his and Sawyer's hearts?

This was a lovely story that had me worried for both main characters and how they would resolve the predicament that they found themselves in. Kudos to the authors for adding their own twists and turns to the story, making for not only a more enjoyable read, but one that had me pleasantly surprised a few times. I loved Sawyer and James, but it was the latter who truly was a revelation, and the man definitely earns a spot in the hall of fame of grand gesture givers because goodness me, what he did was beyond swoon-worthy. The pacing of the story and the development of the main characters were all on-point, and there's one particular supporting character that had me rather curious (and he happens to be one of the main characters in the next After Oscar series, so yay!). BTW: By the Way made me swoon, le sigh, and smile. I tip my hat to Lucy Lennox and Molly Maddox for a five-star read. ♥

BTW: By the Way (book three) - five stars - My Review (posted above)

Purchase BTW: By the Way on Amazon.