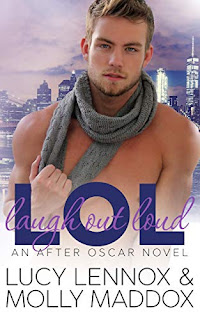 This book, indeed, made me laugh out loud! The sister slash writing duo of Lucy Lennox and Molly Maddox are back with the second novel in their After Oscar series, and it was a hoot and a half. Featuring yet another ex of the infamous Oscar, LOL: Laugh Out Loud is the story of an openly bisexual Hollywood actor with superstar status and a carriage driver and his horse who find themselves without work all thanks to the aforementioned Hollywood hottie. It all begins when a police officer jumps into Scotty Pinkerton's carriage in Central Park and shouts one word at him--"Go!" What's a guy to do? Scotty was all for helping the police, but it turns out that the "police officer" is none other than Roman Burke, actor extraordinaire and overall perfect specimen of gorgeousness. While Roman's actions are swept aside, Scotty bears the brunt of it: he loses his job and, in turn, his home and he's struggling to care for his horse, Nugget. So, he doesn't feel all that guilty about going to the one person who can help--the same person he blames for his sad state of affairs: Roman. If Roman thought having the cute driver leading a horse into his brownstone was weird, the actor, the driver, and even the horse wonder if what happens in Vermont stays in Vermont...

I thoroughly enjoyed Roman and Scotty's love story! This had a tough act to follow in the series starter, IRL: In Real Life, but it turned out to be a wholly entertaining and hilariously fun addition to all things After Oscar. From the moment Scotty and Roman meet, I had seriously high hopes for the rest of their story. I'm pretty sure having a live horse in a brownstone isn't legal in New York--full disclosure: I haven't Googled nor done any other sort of research, so this is an assumption on my part--so suspending my disbelief was necessary, but I didn't care one bit, not when a story is this funny. And if I thought the goings-on in New York were funny, once Roman and Scotty (and Nugget!) where in Vermont, the level of hilarity went up a few notches, thanks to those I like to call the uninvited--and no, I'm not talking paranormal stuff here. Lucy Lennox and Molly Maddox obviously work very well together, making it impossible for me to tell who wrote what. I liked that Roman's ties to Oscar here were not based on heartbreak and I find myself far more curious about Oscar now than I was in book one. This book held quite a few surprises in terms of the direction of the story, and the cast of characters deserves kudos. I'm giving LOL: Laugh Out Loud five stars. ♥