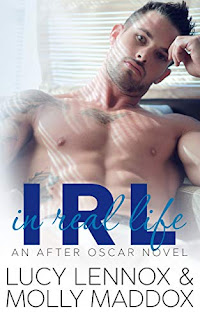 Who'd have thought that my first ever Lucy Lennox read would be one she'd co-written with her sister Molly Maddox? Since this is my introduction to the writing of both Lennox and Maddox, I can't really compare and contrast as to how they would usually write as solo authors. What I will say is that I couldn't tell where one author stopped and the other began. There was a seamless quality to the writing that this duo produced, and that's always a big deal for a reader like me because I want the points of view from either character to be distinct yet not entirely feel as if I actually am getting it from two different authors. Maybe that doesn't make a whole lot of sense, but I hope some of you out there get what I'm saying. Also, because Lennox was a much recommended author by some of my fellow M/M romance readers, I had expectations, and she managed to meet every single one of them.

IRL: In Real Life is the first in the After Oscar series, and it's got a bit of an enemies-to-lovers feel to it but with a twist. Conor Newell is in New York representing his ailing mother in negotiations regarding the patents to an invention in the medical field. Hoping to ease his nerves the night before the big meeting, Conor decides to throw caution to the wind and sends a dick pic to the number the cute bartender gave him earlier. He gets a response, but it's soon obvious that he's texting the wrong number. He gives his name as "Sam" and his anonymous sextmate is "Trace". He likes how controlling Trace is, and talking about his worries has Trace soothing Conor. Trace is nothing like Wells Grange--aka the man Conor's mother has dubbed "That Asshole"--except maybe for the controlling part. There's no denying, however, how gorgeous Wells is, and Conor's curiosity heightens when Wells seems to go out of his way to cater to his wants and needs. He'll do anything for Conor...except tell him that Wells is actually Trace.

Ah, secrets and lies. They'll get you into trouble, no matter what your reasons may be, so it's pretty obvious that there's going to be trouble on the horizon for Wells and Conor because of the whole "NotSam" and "Trace" thing and I was looking forward to seeing how it would all be resolved. Reconciling "Trace" with Wells was interesting, especially since the latter had a reputation for being cold and cutthroat when it came to both his personal and professional lives. My curiosity regarding the series title of After Oscar was satisfied quite nicely, and now I'm curious as to who else will get their story told, especially a particular lawyer who played a pivotal supporting role in this series starter (although James Allen could very well have already had his time in the spotlight in a past Lucy Lennox book that I don't know about...I'll need to do extra research!). As for the romance between Wells and Conor, these two had sexual tension down pat and when it was time for romance, I swooned. You'd think a few days is too quick, and maybe it is, but they had an extraordinary connection I floved. Five stars for IRL: In Real Life. ♥