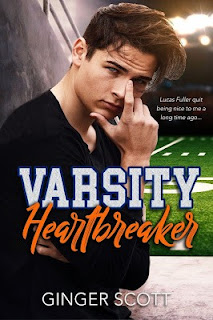 Ginger Scott's back and she's got the first in a brand-new young adult (YA) series! Varsity Heartbreaker kicks off Scott's Varsity series, and it's the story of two former best friends whose paths cross again after two years apart. June Mabee is back in the public school where she once attended, and she dreads her return every single bit. She was bullied by her peers in the past and she doesn't relish the idea of being surrounded by them yet again. She does have one friend she knows will have her back, but it's the friend who abandoned her when she needed him most that terrifies her. To this day, June has no clue what made Lucas Fuller hate her to the point that he no longer considered their friendship worthy of his time or attention. And now, she's back. The hurt and confusion remain, but now there's an added hunger to it--one that demands answers and another that has her wishfully thinking that Lucas will once again be a part of her story. Only this time, she wants it to truly become THEIR story, one with a different ending--or maybe, hopefully, one that never ends. But in order for that to happen, June needs answers, and that will mean unraveling Lucas's tightly held secrets. The question is, will getting answers have consequences?

This series starter lived up to its name because it was, indeed, a heartbreaker of a read. However, it was also one that was bolstered by the seemingly never-ending hope that June had with regards to her estranged relationship with Lucas. She may have come off as needy to some or not giving herself as much importance, but I prefer to see her someone who knew what she wanted and saw beyond what was being presented to her. She realized that there were underlying factors as to the death of her and Lucas's friendship, and it's finding out what made him walk away from what they had built on that's part of what makes this such a fascinating read. I loved her loyalty to her mom and her friendships with Abby Cortez and Tory D'Angelo. As far as Lucas is concerned, I can readily admit that there were times where I wished I could smack him upside the head. Yes, when everything is revealed later on, I could see why he turned his back on his friendship with Abby, but there were still moments where his treatment of her was cruel, to the point that there was no justifying it. Still, I appreciated the fact that June persevered, that she listened to both her heart and head. Varsity Heartbreaker was HER story, and it get 4.5 stars. ♥