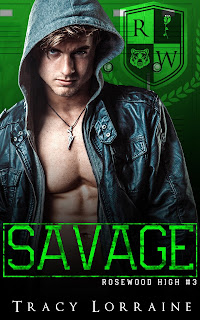 Third time's the charm! I've enjoyed the first two novels in Tracy Lorraine's Rosewood High series, but I may have finally found my favorite in the third and latest book. Savage is an enemies-to-lovers romance with a whole lot of potential step-sibling feels. I say "potential" because the main characters aren't officially step-siblings even if their parents happen to have a relationship since they aren't married. You could dive into this one and read it as a standalone, but with a cast of recurring characters, I suggest you read the books in order--Thorn, followed by Paine, and then read Savage.

When his mother made the decision to move to Connecticut after learning of his father's infidelity, Ethan Savage made his own painful choice to continue living with his father because of all his future plans. He knew sharing the same house with the man who had fallen so far in Ethan's eyes wasn't going to be easy, but things go from bad to worse when his father moves his assistant, who also happens to be the woman he was having an affair with, into their home. Making it go from worse to worst, however, is that the woman has her daughter in tow, and she'll be going to Rosewood High, too. Ethan is about to live up to his name and savagely make life a living hell for Raelynn Pritchard.

Ethan and Rae are the sort of pairing that captures your attention from the moment you first meet them, and then steal your heart the more those complex layers surrounding them are peeled away. I understood Ethan's anger, and while it doesn't excuse his treatment of Rae for a good portion of the book, I did get where he was coming from and that he believed she was the right target for said anger. Of course, he underestimated just how much back bone Rae had, and the sparring these two engaged in felt like foreplay at times. There were a lot of feels, and goodness, but how this book more than met the angst quota for me. Savage easily gets five stars. 🖤