Review: Fight for Me by Corinne Michaels (Arrowood Brothers #2) 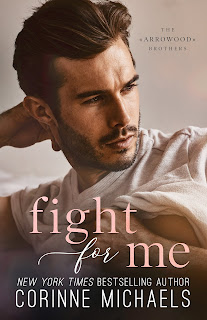 Note: An advanced reader copy (ARC) was provided by author via Valentine PR.

Note to self: I seriously need to read Come Back for Me as soon as humanly possible. If you're familiar with my reviews, you'll remember that I'm a stickler for reading books in a series in order. I make the rare decision to skip ahead when my gut tells me to or when I'm familiar with an author's writing. I already know how gifted of an author Corinne Michaels is, so I decided to chuck my policy regarding series reading to the side--temporarily, of course!--and I'm so glad I did. Were their spoilers? Yes, but it was worth it because I got to read a beautiful second-chance romance, and now I'm all curious about the first book as well as the future ones.

Fight for Me is the second novel in the Arrowood Brothers series, which is about four brothers bound together by their love and loyalty to each other and one secret that's kept them from returning home...that is until the death of the father they were all estranged from forces them to come back to the place they swore they would never see again. Book two features the eldest among the brothers, Declan Arrowood, and the only girl he's ever loved, Sydney Hastings. He loved her when he was ten and made promises at sixteen. Four years later, those promises were broken, as were both their hearts. Eight years later, Declan is back in Sugarloaf, with no choice but to live there for six months. Being around Sydney shouldn't change his plans, but fate is about to do that for the both of them.

Oh, but how this book had me on a roller coaster of emotions and merry-go-round of thoughts. There were times where I cheered these two on, but there were also moments where I so wished I could slap them upside the head, the latter more directed at Declan than Sydney. My heart broke for the brothers. No one should have had to endure what they did, and I understood why they felt they had to make the choice that they did. That life-changing event from.eight years ago has left me with questions, especially since I picked up on a spoiler or two. However, I was still able to fully enjoy and appreciate Declan and Sydney's story, and I'm left wanting...wanting so much more from the Arrowoods! I'm giving Fight for Me 4.5 stars, and can't wait for book three. While waiting for that, I'll be reading book one! 🖤

Purchase Fight for Me on Amazon | Apple Books | B&N | Kobo.