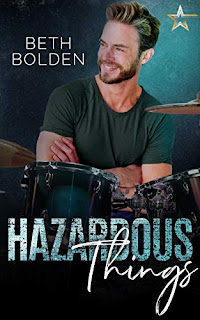 Hazardous Things is the third novel in the Star Shadow series from Beth Bolden, and it's a friends-to-lovers romance between Star Shadow's drummer, Max McCloud, and the band's personal assistant (and Leo Humphries's younger brother), Felix Humphries. While Max's best friend is the older Humphries brother, it's the younger one he feels closest to, and it's a friendship that's flourished from the moment a teenage Felix knocked on his front door and informed Max they would be friends. But over the past six months, something has changed--Felix seems to be keeping his distance from Max. The chummy and comfortable teasing and affection they'd shared for years is gone, replaced by cold indifference. When Max schedules himself for a necessary surgery, he intends to take care of himself, not wanting to impose on the much-needed time away the rest of Star Shadow needs after an album and two grueling tours. So, imagine his surprise when he realizes that Felix insists on taking care of him while recuperating. Maybe Max will finally get answers to their estrangement, but could he end up questioning his sexuality when he realizes just how attracted he is to Felix? Could they explore what's developing between them while keeping it strictly as nothing more than friends with all-new benefits or could they end up losing everything?

Max and Felix may have been as close as they were, but that certainly didn't mean that their friendship didn't suffer from an utter lack of communication. However, I understood why Felix didn't feel like he could say what needed to be said. After all, the potential for rejection was ever present, especially since he was gay and the man that he'd been in love with for years was, as far as everyone knew, straight. Heck, even Max never saw himself as anything. There's a whole lot of inner debate and contemplation with these two, what with their inability to share said thoughts and feelings swirling in their heads and hearts with the person closest to them--each other. It was a good read, though I confess there were moments where I felt like shouting at my tablet and telling the main characters to just be honest and talk and listen AND DEAL! We also get bits and pieces of the first two couples, and it's clear that there's something brewing between Leo and Caleb. Looks like that ending in Terrible Things was more "happy for now" than "happily ever after" (and yes, they have another book in the offing--the fourth and final one in the series which is due for release in late June). All things considered, I'm awarding Hazardous Things four stars. ♥