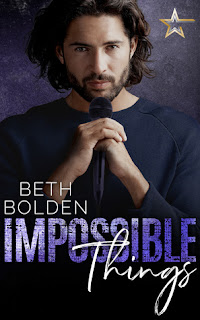 Impossible Things is the second novel in Beth Bolden's Star Shadow series, and while it could possibly be read as a standalone since it features a different couple than the one in the series starter, Terrible Things, I do recommend that the books be read in order because of the recurring characters and for some much needed back story.

Benji Schmidt and Diego Gonzalez have had feelings for each other for a decade, but neither one was ever read to do anything much about it. Now that they're both divorced from their wives, you'd think that it would be the perfect time for time to finally be open and honest about them wanting to be more than just friends, but years of denial and not acknowledging their sexuality has them hesitating.

I loved the first book in this series and was looking forward to seeing how Benji and Diego would follow in Leo and Caleb's footsteps and take a stand for their love for each other. But gah, how these two frustrated me. There was A LOT of taking a step forward and then two steps back that went on with them. Just when one was ready to move forward, the other would suddenly waffle and be reluctant. Yes, they loved each other, and yes, all those years of keeping things platonic led to some steamy encounters, but I just wish these two listened more to each other.

I did like the angst and I felt that there was genuine chemistry between Diego and Benji. I also liked seeing where Caleb and Leo where in their own relationship and how the band was doing as a whole after the forced reunion tour. While this may not have reached my admittedly overly high expectations, it as still an overall enjoyable read. Four stars go to Impossible Things. ♥