Review: Intrigued by Love by Sienna Snow (Written in the Stars #5) 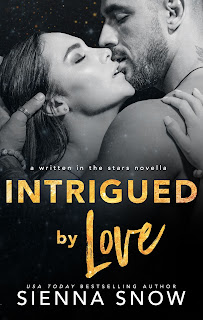 Sienna Snow is one of those authors that I've heard about time and again, but whose work I have yet to personally experience. I was finally able to satisfy my curiosity when the opportunity to read and review her newest book came along, and I got to see what all the "fuss" was about and realized it was justified. Intrigued by Love is the fifth novella in the multi-authored Written in the Stars series, and while it felt like it was a spin-off or part of an already established series or more by Snow, I was still able to enjoy the actual story and main characters even if I was rather curious about the supporting characters who were very much invested in the romance between the couple.

It's been about two years since Kailani Alexander last saw Jackson Burton, and while she wishes she could avoid the man she's never forgotten, living on an island in Bora-Bora and being in charge of her sister's wedding preparations makes it impossible to up and leave. Interacting with Jax is inevitable given that he's close friends with her soon-to-be brother-in-law and maintains ties with her family. What she doesn't realize, however, is that he isn't only on the island for the upcoming nuptials; Jax wants an explanation as to why she upped and disappeared two years ago from their Vegas home. Another thing Jax wants? A chance to win back his Little Bird.

This second-chance romance was a good quickie read, one that had a lot of steam, a pinch of angst, and bites of humor. The blurb mentioned that it was Jax who had ghosted Kai, but after reading the book, it felt more like she was the one who ghosted him, especially given the amount of time that he had to be away from her to take care of certain things and she basically left him with nary a word for years. That being said, I liked the chemistry between these two and it was clear from the get-go that they'd never gotten over each other. There was romance, some kink, and a whole lot of family, making for an entertaining read. I'm giving Intrigued by Snow four stars out of five. ♥

Purchase Intrigued by Love on Amazon.