Book Spotlight: The Orphan of Cemetery Hill by Hester Fox 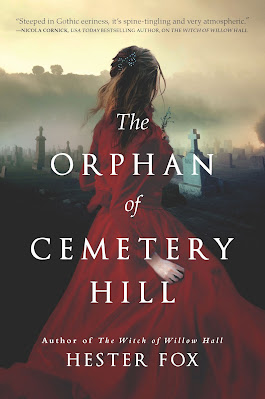 About The Orphan of Cemetery Hill
The dead won’t bother you if you don’t give them permission.

Tabby has a peculiar gift: she can communicate with the recently departed. It makes her special, but it also makes her dangerous.

As an orphaned child, she fled with her sister, Alice, from their charlatan aunt Bellefonte, who wanted only to exploit Tabby’s gift so she could profit from the recent craze for seances.

Now a young woman and tragically separated from Alice, Tabby works with her adopted father, Eli, the kind caretaker of a large Boston cemetery. When a series of macabre grave robberies begins to plague the city, Tabby is ensnared in a deadly plot by the perpetrators, known only as the “Resurrection Men”.

In the end, Tabby’s gift will either save both her and the cemetery—or bring about her own destruction.

Hester Fox is a full-time writer and mother, with a background in museum work and historical archaeology. Most weekends you can find Hester exploring one of the many historic cemeteries in the area, browsing bookshops, or enjoying a seasonal latte while writing at a café. She lives outside of Boston with her husband and their son.
Connect with Hester
Website | Twitter | Instagram | Goodreads