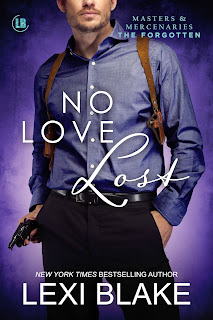 "That's what I do, isn't it? I argue with anything you say. Even if I agree with it, I fight. Do you wonder why that is?" Beck's voice was as soothing as his hands.

"Because you hate me."

"Because if I don't, if I let my guard down for a single second, I'll remember everything I ever loved about you and I'll give in. But lately I've wondered if I'm not punishing myself as much as I am you. And I'm wondering why I'm punishing you at all."

All. The. FEELS. This book gave me every single feel that I expected and then some. The story of Beckett Kent and Kimberly Soloman has got to be one of the most anticipated reads out of there. These two have been such notable peripheral characters for what feels like forever, and I'm thrilled that it's their book that's going to wrap up Lexi Blake's Masters & Mercenaries: The Forgotten series. Speaking of the series, this is the part of my review where I feel it's necessary that I point out that the all five books are best experienced if you read them in order. Sure, you could try and dive in straightaway to Beck and Solo's story, but this series has a rich back story concerning the eponymous "forgotten" that I believe everyone will benefit when they read all the books--Lost Hearts (formerly titled Memento Mori), Lost and Found, Lost in You, Long Lost, and No Love Lost.
Beckett Kent and Kim Soloman know all too well what it's like to love so deeply and to lose something and someone who mattered greatly. They were once on the same side; there was a time when their lives were revolved around each other and the work they believed in. That all came to an end when Beck lost someone near and dear to him, and the blame for that loss was one he placed at the feet of the woman he loved. Years later and now Beck carries the name of that person he continues to mourn: Ezra Fain. He makes it clear time and time again that he's never forgiven Solo nor will have ever forget her role in the real Ezra's death. But When Solo is accused of a crime she didn't commit, it's Beck who is surprisingly by her side. Being on the run forces them to no longer run from their feelings, but an ever-present adversary and secrets revealed may change it all.
Goodness but how this book had me at the edge of my seat! There were twists upon twists, although one particular twist--which I consider the biggest of them all--was one that I had niggling in my head from the beginning. Even though I was proven right, my enthusiasm never waned because I was so darn emotionally invested in Beck and Solo's story. I mean, come on, how could I not be all in with these two, considering just how long they've been making their presence felt throughout the series. Having not read most of the original Masters & Mercenaries series, I have no clue if these two were around for any of those books, but I was still able to fully enjoy their book in particular and the Masters & Mercenaries: The Forgotten spin-off series as a whole. Beck and Solo's story is a special one, and Lexi Blake did them and her readers proud. Five-plus stars go to No Love Lost.
------------------------