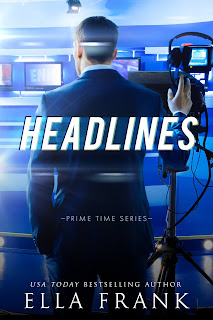 Note: An advanced reader copy (ARC) was provided by the author.
The much-awaited third and final book in the Prime Time series is finally here, and we readers finally get to see Sean Bailey and Xander Thorne get their happily-ever-after--because, come on, did anyone ever doubt they'd get one? Headlines picks up sometime after the ending in Breaking News, which basically means that you MUST read the books in this series in order: Inside Affair (book one), Breaking News (book two), and Headlines (book three). This has a continuing story line, and the first two books have cliffhangers.
Sean Bailey and Alexander Thorne have turned a corner in their relationship, committed in making a true go at being a couple, mindful that there will be challenges but not letting any stop them. But what if the greatest challenge that lays before them now happens to be one of the most important people in their lives? Bailey may be Sean's younger brother and he may have been Xander's former boyfriend at one point while remaining his very best friend, but that doesn't mean he approves Sean and Xander being in a relationship. They may have found true love with each other, but will being together mean severing their ties to Bailey? And if Bailey demands a sacrifice to mend fences, who'll break first?
I admit it! There may have been a couple of times while reading this book that I was tempted to shake some sense into Bailey. I understood where he was coming from, but hey, he already got his HEA, and if anyone should have been rooting for Sean and Xander to get theirs, it should have been him. Still, this particular complication was one that I was really curious to see resolved. Kudos to Ella Frank for ensuring that there wasn't some quick and easy fix, allowing for certian characters to come to their own realization that Sean and Xander were the real deal. That ending? So sweet! Five stars for Headlines.
-------------------------

Read my reviews for the Prime Time series:

Inside Affair (book one) - five stars - My Review