Review: Risking It All by Isabel Lucero (Kingston Brothers #4) 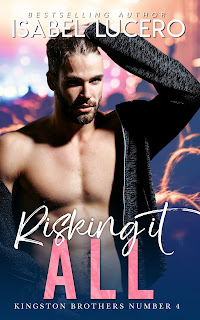 "But those are just words. We've said a lot to each other over the years. You've consistently told me one thing just to do something that completely contradicts it. Why should I believe you now? Or ever?"

"I'm trying to get you to realize I'm not like that anymore. If I say something, I want you to believe it. I've had years to dwell on my bullshit. I've had so many regrets, and honestly, if I was in your shoes, I don't know if I'd forgive me. But you're better than me, Ali. You always have been, and you make me want to be better. For you."

I have been so antsy for this fourth and final book in the Kingston Brothers series from the moment it was announced, and now that I'm finally done reading it, I want to go back to the very beginning of the series and re-read how each of the four brothers found love and their much deserved happily-ever-afters. I've loved and liked and adored the first three novels--in that order--but this fourth one was in a class all its own. There was something beautifully extraordinary yet surprisingly sweet love story of two best friends who fell in love as teenagers, drifted apart when music stardom and fears got in the way, and then life went on...until one of them decided the time had come to get real--to be the truest version of himself and to see if there was a chance to be with the one guy he loved. Yeah, yeah, I'm probably over-simplifying, but that's the barest of glimpses as to the story to be found in Risking It All.
When Merrick Kingston was sixteen, he kissed his best friend, Alejandro Barrera. For the next two years, so many of their firsts were experienced together before Ali went off to college and Merrick and the rest of his band mates went from place to place playing their music. Their paths would cross time and again. Then six years ago, Merrick made Ali promises--promises that he broke when he left Ali behind, shattering his best friend's--the boy he loved's--heart in the process. All this years later, a little over a decade since that first kiss, Merrick is back in Gaspar. Back in his hometown after his band's latest world tour ended--to spend time with his brothers and the women they loved. An maybe, just maybe, he can find his way back into the heart of the only person he's ever wanted and loved. Merrick knows he needs to earn Ali's trust and that coming out is just one of the steps. Is he finally ready to risk it all for love?
I love reading romance in general, but from the moment I discovered M/M romance in 2012, it was like falling down the proverbial rabbit hole, and there was no dangled carrot enticing enough--even if it were chocolate-covered--for me to get out of said rabbit hole. So, imagine my excitement when I found out that Merrick's story would be an M/M romance, and that it had second-chance, friends-to-lovers, AND rock star romance vibes. Gah! There was so much about Merrick and Alejandro's story that called to my heart, and I simply felt privileged to have a front-row seat to all of it. The fear of judgment and rejection when it comes to being open about one's sexuality tugged at my heartstrings. I pray the day will come when "coming out" stories aren't necessary and acceptance is simply a given. The Kingston Brothers series had a recurring theme of love--for family, community, friends, and your partner--and it shone brightest with Risking It All. This series ender easily and deservedly gets five-plus stars.
-------------------------