Review: Against the Rules by Isabel Lucero (Kingston Brothers #3) 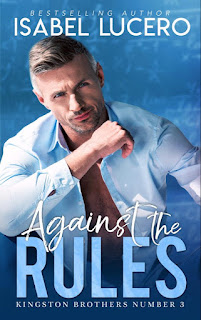 Aaand I've just come across my favorite book in the Kingston Brothers series! I loved the first novel, On the Rocks, and I liked the second one, Truth or Dare, but the third one I adored. Against the Rules features the eldest Kingston brother, thirty-five-year-old Elijah, who happens to be a calculus professor at the University of Gaspar. After his ex broke his heart years ago, being in a committed relationship stopped being a priority for him, choosing instead to keep things casual with his go-to partners whenever he felt the need to have sex. He had his three brothers, Royce, Cillian, and Merrick, his dog, Sugarfoot, and his work, and those were what mattered most. When he noticed the gorgeous young woman at his brother's bar, the one-night stand they share wasn't one he expected to be a life-changer. Elijah wished he had gotten the girl named Nova's number. He wished they had spent more time together that night. And when twenty-one-year-old Nova Rivera enters his classroom Monday morning, he finds himself wishing that she wasn't his student. Elijah isn't one to break the rules, but the more he's around her, the more he wonders if rules were meant to be broken.

I thoroughly enjoyed reading Elijah and Nova's story. They met before they knew that they were going to be professor and student, and that's where the expected dilemma lies. It was interesting to see the dynamic between them as he tried to do the right thing and not pursue anything with her since she was his student, and she couldn't help but flirt with him, hoping he'd break and teach her a very different lesson or two. These two were seriously hot together, and while it was clearly lust in the beginning, I liked seeing their feelings evolve into more over time, and with that the dynamic shifted as well, with the two starting to become equals in a relationship rather than teacher-student or older guy-younger girl. Bonus points, as always, for the family angle, especially with Elijah being reminded by his brothers that they had his back--and it was clear that they were thrilled that he was prioritizing his personal happiness for a change--and with Nova's older sister, Gia, being very protective of her, and for good reason! And even more bonus points for Sugarfoot just because. There's a bit of a suspense angle to the story that had to do with Nova's ex, but think of it as more of a dash of extra flavor than it turning this book into a romantic suspense read. Against the Rules was a five-star read. I can't wait for Merrick's book!

Against the Rules (book three) - five stars - My Review (posted above)

Purchase Against the Rules on Amazon.