Review: On the Rocks by Isabel Lucero (Kingston Brothers #1) 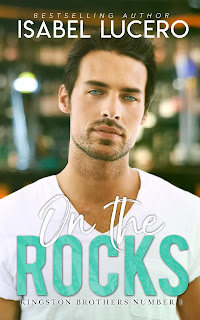 Isabel Lucero was a new-to-me author prior to reading the first novel in her Kingston Brothers series, and well, it looks like I've been missing out because this series starter was one heck of a fiiiiine introduction to her writing! As the title will clue you in, this series is about the four Kingston brothers--Elijah (35, college professor), Royce (27, bar owner), Cillian (26, artist), and Merrick (22, rock star in the making)--with On the Rocks being the opening salvo. The alcoholic beverage with ice reference obviously means this is all about Royce. Now, all the brothers are known for being quite appealing to the female population of their hometown of Gaspar, and Royce's reputation for having his choice of hook-ups and ONLY hook-ups isn't a secret. So, why should London Monroe take his flirting seriously? Not only does she know he isn't a relationship sort of guy, London happens to be in a relationship herself...until she isn't. One hook-up later and Royce knows he wants more with London--only she's now back with her ex. Maybe these two can try to be nothing more than friends, but Royce is not giving up on having everything with London.

This is the sort of book that makes me sit up and take notice, not only because this is my first-ever read from this particular author but also because it's an introduction to a cast of characters and a small town backdrop that'll be recurring throughout a new series. One of my favorite things was the chemistry that Royce and London had. From the moment readers meet them at the beginning of the book as Royce flirts with her and she resists his charms with aplomb to them trying to move forward after their one-night stand even though they're clearly and absolutely into each other, these two shared the sort of connection that made it obvious they were meant to be if only they'd get their respective acts together. I enjoyed seeing their relationship develop from acquaintances whose interactions were limited to her visits to his bar to one-time hook-up partners to friends and then much more. This also had a great supporting cast of characters, leaving me with high hopes for the books to come in the Kingston Brothers series. Suffice it to say that Isabel Lucero has impressed me, which is why On the Rocks garners 4.5 stars. ♥

Purchase On the Rocks on Amazon | Apple Books | B&N | Kobo.