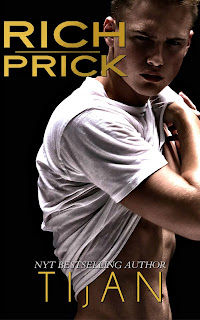 This book! This story! These characters! The crossover! GAH! Once again, I need to remind myself to read the darn Fallen Crest series, not because you MUST read it in order to understand what happens in this new book, but because my curiosity is getting the better of me and many have told me that the series as a whole is a MUST-READ! But I digress... What I do recommend you read prior to jumping into Rich Prick is the currently available Crew books, Crew and Crew Princess, because there are very important ties between some of the main characters in the books, particularly, Blaise DeVroe and Cross Shaw, who are actually half-brothers who share the same father. However, you could try to read Rich Prick on its own and still get a clear enough idea of what's going on and how some characters may be tied to others.

Seventeen-year-old Aspen Monson likes being invisible. She'd prefer not to be noticed for any reason, whether good or bad, and revels in her anonymity, especially around her school, Fallen Crest Academy. Only, she's finally caught someone's interest, and it isn't just some regular fellow senior either. It happens to be none other than eighteen-year-old Blaise DeVroe, best friend to the school's "king". After catching sight of Aspen in the woods during a party, Blaise's curiosity has been piqued. They're drawn to one another, and even though it seems their connection doesn't make much sense to almost everyone else and many disapprove, neither one wants to stay away. They see each other in a way no one else ever has, but when their respective secrets and issues are revealed, will they choose to walk away or hang on and fight for love?

Rich Prick isn't exactly a short read yet it's paced at a pretty fast clip. The romance aspect between Aspen and Blaise happens quickly, going from two students who went to the same school yet never having spoken to each other to kinda-sorta-maybe friends and then to far more. I loved the chemistry these two shared, and how devoted they were to each other. It was as if their being together became the impetus for almost everything else to somehow slowly but surely fall in to place because they provided a different kind of perspective. Having some of the characters from the Crew series was a definite bonus, and I grew to adore Blaise's best friend, Zeke Allen. I also can't wait to read more about Aspen's oldest brother, Nate, as well the much awaited third Crew book.

As much as I loved the story and characters, I hesitated on giving a higher rating because there were points in the book where the contractions felt awkward, especially in casual conversation. For example, "I've not said anything," which reminds me of the historical and regency romances I love to read, rather than "I haven't said anything." Then there's Blaise's relationship with his biological father, Stephen Shaw. I get why Blaise called him by his first name after learning the truth about his true parentage, but even years after, Blaise still called Stephen by his name. Maybe it was personal preference on his end, especially given what he had to live with when he believed Griffith DeVroe was his real father. But yeah, these could simply be my own hang-ups, and neither one really took away much in terms of the story OR how much I loved reading it, so at the end of the day, Rich Prick gets five stars. ♥