Review: The Dare by Elle Kennedy (Briar U #4) 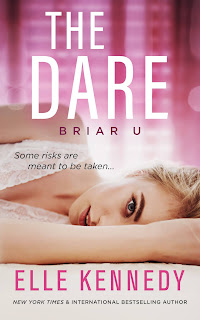 School's back in session as Elle Kennedy returns to her Briar U series with the fourth book, The Dare. Being part of a sorority was supposed to be something good, but the only good that's come out of college junior Taylor Marsh's experience has been her best friend. But she sucks it up and tries to not rock the boat, so when one of the queen bees insists on playing Dare or Dare, all she can do is hope to not be chosen. Totally wishful thinking, especially given that said queen bee lives to make life hellish for Taylor. The dare? For her to seduce a hockey player, and not just any hockey player. It has to be none other than recent transferee and the hottest junior student athlete around--Conor Edwards. Who would have thought asking him to help her with the dare would lead to not only an unexpected friendship but a fake relationship, too? The more time they spend together, though, the more everything feels real, but will Taylor dare to hold on to what she and Conor have or let it all go?

This needs to be said: Conor Edwards is, hands down, the best thing about this book. Seriously. There was an inkling of how interesting a main character he would be given the chance, but goodness, he blew through all my expectations and turned out to be even more awesome than I could have hoped for. He had a big heart and was truly someone who was way more than the hockey player who happened to have been with more than his fair share of collegiate puck bunnies. I loved how he encouraged Taylor to see her body in a more positive light. Speaking of Taylor, there was a lot about her that I liked, although I confess that her body issues never seemed to have been fully resolved. As someone who knows all too well what it's like to be judged by my size and shape first rather than who I am on the inside, I could relate to her struggles. But while I know that it can take years for one to embrace who they are, I wished that Taylor had gotten farther than she did. I also wasn't a fan of how she treated Conor when one particular event caused chaos, but I get that it was part of the story, and it did make for a good opportunity for some redemption. But again, Conor was just... LE SIGH. I'm handing The Dare four stars out of a possible five stars.