Review: It's Only Temporary by Lisa Suzanne (My Favorite Band #5) 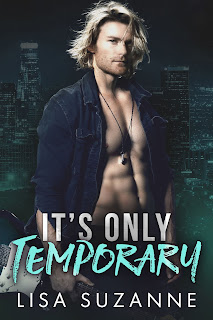 Lisa Suzanne is a new-to-me author and It's Only Temporary is my first read from her. Touted as a standalone, this book is part of Suzanne's My Favorite Band, aka MFB, series. I had no clue that there were other books that came before this one, and yes, I know that the books are promoted as standalones, but the fact that the male main characters in each of the books are tied together by their being part of the same band made me wish I had read them in order, especially since there were times while reading where I felt I was missing something. I'm also a stickler of sorts when it comes to books in a series. But I'm getting ahead of myself here... Suffice it to say that I may end up reading the four previous MFB books, but again, that can wait till later.

It's Only Temporary is the story of Kane Keller, bassist for MFB, a highly successful rock band that's currently on hiatus as most of the members of the band have found love and are settling down. During their break, Kane and another member of MFB play with Ruby Ray, the vocalist of her own eponymous band. When he participates in a bachelor auction, the plan was for his girlfriend of seven years, Sierra, to bid on him and win, but an ultimatum marks the end of their relationship and leads to Ruby winning the date with Kane instead. The attraction was already there; could it become more? What happens when Sierra asks him to give their relationship another chance? Will Kane end up choosing the woman he's loved for years or the one he's falling for now? And when all is said and done, will everything change permanently?

If I had to base my rating on the quality of writing, I'd have given this five stars. Lisa Suzanne knows how to write and she does it well. Where I hesitate though, is with the main character, Kane. For the record, I have no problem reading books that have to do with love triangles. Cheating isn't even a hard limit, and no, there is no cheating that goes on here, not counting when Ruby was cheated on by her ex-boyfriend. The story itself had me captivated, and I'm sure like every reader, I was curious to see if my suspicion as to whom he would end up choosing was right--it was--based on the blurb. But Kane was a hot mess, going back and forth (and back and forth) A LOT. I understood why he was taking forever to make choices and decisions and how he didn't want to hurt anyone, but in the end, people were still hurt, and not just the one he didn't choose. Sigh. So yeah, he's happy, and he's worthy of that happiness, but I wish that fewer hearts had been broken. While I may not have been a big Kane fan, I did appreciate the author's storytelling and It's Only Temporary as a whole. 3.5 stars. 🖤

Purchase It's Only Temporary on Amazon.