Audiobook Review: A Way With Series by Lane Hayes, narrated by Alexander Cendese 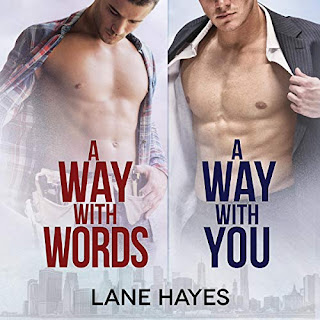 A Way with Words and A Way with You are the novellas written by Lane Hayes that I've been eagerly waiting to be made into audiobooks for the very simple reason that they were the only titles left on her list of published works that had yet to be given the audio treatment. So, when Hayes announced that they were finally going to go into audio, I was thrilled. Of course, the wait ended up being longer than expected when the dual audiobook was held up in Audible limbo for weeks. But rejoice all, because now, the A Way With series is out and about, and the cherry on top is that one of my favorite narrators, Alexander Cendese is bringing these two couples and both their stories to life.

A Way with Words is the story of Tony De Luca and Remy Nelson, the former being a twenty-nine-year-old working in construction and the latter a twenty-seven-year-old musician and bartender. Tony's family has always tried to pair him up with the perfect girl, but no one realizes that the reason he's never clicked with any of them is that he's gay. He's never had much reason to divulge his sexuality, but then meeting Remy changes all that. I liked these two together and felt they had grown as characters and their relationship evolves well. Hayes penned a sweet and sexy story and Cendese doesn't disappoint one little bit, but that's not really a total shocker if you're familiar with his work. Five stars.

A Way with You turns our attention to Reeve Nelson, the thirty-one-year-old brother of Remy from the first book. Here, he's completed his move from Elmhurst to Manhattan and will be working under the watchful and critical eye of thirty-six-year-old Leo Rodriguez. Reeve realizes all too soon that life in the big city is far more demanding and competitive compared to his hometown. There's a lot of tension between Reeve and Leo, and goodness, these two needed a crash course on communication and how to be in a relationship. This was enjoyable to listen to, although if I'm being honest, Tony and Remy's story is still my favorite between the two by just a smidgen. Cendese's narration is on-point and he truly did justice to Hayes's storytelling. 4.5 stars. 🖤

Purchase A Way With Series on Audible.