Review: Forever Only Once by Carrie Ann Ryan (Promise Me #1) 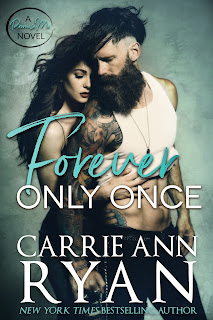 I've missed reading Carrie Ann Ryan's writing. but I'm thrilled that I got to re-acquaint myself by way of the first novel in her brand-new series, Promise Me, which is about four best friends (Hazel Noble, Paris Trissel, Dakota Bristol, and Myra West) and the pact they make to put themselves out there and go on blind dates and the four Brady brothers (Cross, Prior, Macon, and Nate), with the first three being the older brothers of Arden (now married to Liam Montgomery, Wrapped in Ink, Montgomery Ink: Boulder, Book One), and Nate being her twin. Book one is Forever Only Once and it's basically about a blind date and a meeting with potential client, neither one going to plan yet becomes the starting point of an unlikely connection. But as undeniable as their chemistry may be, math professor Hazel's past keeps her wary and somewhat hesitant. Can furniture designer and maker Cross convince the woman who's beguiled him to take a chance on a promising future with each other?

This series starter has a lot of romance to it with a dash of suspense thrown into the mix, making for both an enticing and intriguing read. The main characters were equally interesting, and the much needed connection was ever-present. I liked Hazel's friendship with Paris, Macy, and Dakota, and while these four women had different personalities, it was clear that they were bound together with a genuine affection for and loyalty to each other. Then there was Cross and his relationships with his four younger siblings. He was as protective of them as they were of him. Hazel's and Cross's interactions with those closest to them highlighted how strong of a support system they each had, yet there was still something missing...until they found each other. Hazel, in particular, was inspiring, truly coming into her own over time with Cross. Their meet-cute certainly ranks as one of my favorites for the year, and their story as a whole has set the bar for the next three books, all of which I'm looking forward to reading. I'm awarding Forever Only Once 4.5 stars out of five stars. ♥

Purchase Forever Only Once on Amazon | Apple Books | B&N | Kobo.