Review: Thinking It Over by Becca Seymour (True Blue #4) 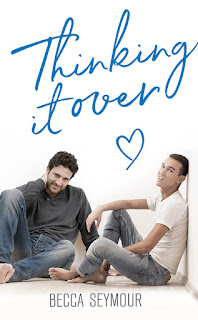 I discovered Becca Seymour's True Blue series, having read the first three books, and I'm thrilled that she's continuing it with the release of a fourth novel! Thinking It Over is the newest story in this M/M small-town romance series, only this time around, it's set in two small towns--Kirkby and Crescent, which is thirty miles away. If you're familiar with the series, you'll recognize one of the main characters, twenty-four-year-old Jasper Taylor, a barista at Split Bean who has a degree in education but hasn't been able to find a teaching job nearby. When he gets a phone call from Crescent High, he knows this could be the opportunity he's been hoping for. He expects the work to be intense and that it will take some time for him to get to know his students and fellow teachers. What he doesn't quite expect is to be attracted to the school's principal, forty-year-old Austin Harrison, a man whose last relationship ended disastrously and whose main source of company is his Labrador, Penny. Jasper and Austin are drawn to each other, but will acting on their connection lead to complications, professionally and personally, or could it be worth it all in the end?

There was a lot about this book that I loved. There wasn't a great deal of drama or some sort of overly drawn conflict. The way everything played out between the main characters, Jasper and Austin, felt natural and so darn easy-going. In a time where there's a lot of heaviness in the real world, an escape like this is very much appreciated on my end. I seriously loved these two and how they seemed to bring the best out of each other. There are several supporting characters here who are rather notable, namely, Ian (Jasper's best friend), Billy (Austin's housekeeper), and Frankie (Austin's brother). Of course, we can't forget Penny, who was an adorable fur baby. There were also appearances from recurring characters as well as the guys' respective families and the other teachers over at Crescent High. The author really brought the small town feel and charm and written a sweet story about finding love and fighting for it. I have a feeling we haven't seen the last of these two, especially since there were still loose ends waiting to be tied, and I certainly wouldn't say no to reading more about them and the rest of the noteworthy characters. 4.5 stars go to Thinking It Over.

Purchase Thinking It Over on Amazon | Apple Books | B&N | Kobo.