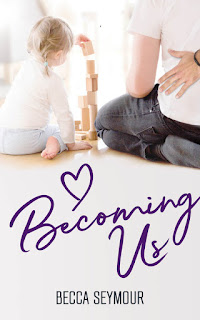 Becoming Us is the newest release from Becca Seymour, and it's part of her True Blue series. Yes, the series now has a name! Yay! While the first two books--Let Me Show You and I've Got You--are standalone stories that have recurring side characters, this third book is a novella that serves as a direct sequel to the second book. Veterinarian Scott Anderson and coffee shop owner Davis Jackson--along with Davis's daughter, Libby--have joined their lives, becoming a solid and happy family unit in the six months since Davis asked Scott to move in. Everything is good in their world in their small town of Kirkby, but during a short respite from their fatherly duties in the city, Davis can't help but take note of how much more open Scott is with his affection. Could being in as small a town as Kirkby be limiting Scott and does being in a relationship with a father who has a child stifle everything that Scott could possibly be? What happens if Davis voices his observations to Scott and it leads to one major misunderstanding?

This was a sweet follow-up to Scott and Davis's story, like the "ever after" in their happily-ever-after in I've Got You. As always, Libby is both precious and precocious, and she's an absolute darling, especially when she shows just how much she loves both her Daddy and her Scott. As for her fathers, well, they're handling the merging of their lives quite nicely, thank you very much, but one night of "freedom" does have Davis wondering if all is as well he thought it was. We get the usual suspects--aka recurring characters--and what looks to be a potential couple in the making (yes!). That being said, make sure to read the True Blue stories in order! I'm giving Becoming Us four stars. ♥

Becoming Us (novella) - four stars - My Review (posted above)