Review: Dear Sexy Ex-Boyfriend by Lauren Blakely (The Guys Who Got Away #1) 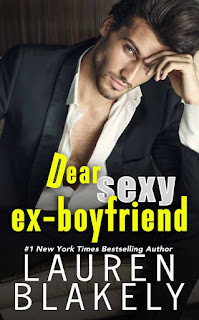 Lauren Blakely kicks off her new The Guys Who Got Away series with a friends-to-lovers slash fake-fiancée romance that had me grinning with rom-com satisfaction by the end. Dear Sexy Ex-Boyfriend introduces readers to Oliver Harris, a thirty-one-year-old lawyer whose family moved from London to New York City when he was thirteen. He also happens to be the cousin of Christian Ellison, whose story plays out in Blakely's Part-Time Lover (book two in the From Paris with Love series), and close friends with Jason Reynolds from Blakely's Instant Gratification (book three in the Always Satisfied series). Strangely though, while Christian does mention Oliver as his cousin in his own book and also mentions Jason once as another Brit in New York, Jason doesn't mention either of them in his book, yet Oliver points out several times that not only is Christian his cousin, but so is Jason. It was confusing, but maybe Jason's a cousin from the side of Oliver's family that Christian isn't. Yeah, it may seem like a minor thing, but it bugged me a bit since I like getting those familial ties clear. However, none of it played a part in the actual story, so, let's move on now, shall we?

Oliver Harris and Summer Clarke, along with Summer's twin brother, Logan, have been the closest of friends for seventeen years, Summer having been there when Oliver lost his beloved older sister, Phoebe. Over the years, their bond has strengthened, and their friendship has become one of the most cherished things in their lives. Naturally, neither one wants to do anything to jeopardize what they have, and crossing the line from platonic to romantic was simply something neither one considered a possibility, no matter how many times those nearest and dearest to them have pointed out how much they belong together. Oliver and Summer have always had each other's backs, so when Summer's letter to her "sexy ex-boyfriend" for a magazine contest goes viral and people figuring out that it was addressed to Oliver--she knows she would do anything to make it up to him. Pretending to be engaged was something she could easily do. Pretending to not be in love? Not so easy.

Is it weird that one of my favorite things about this book is the male main character's first name? Yeah, he and my late fur baby share the same name, and while Oliver (the fictional character, not the dog) hated his nickname, in my head, I was calling him "Ollie" anyway. This guy was charming and witty and was obviously meant to be with Summer. The thing is, these two were getting in their own way because they didn't want to risk losing their friendship by taking a chance on dating and becoming more. So, of course, things change once they get into the whole fake engagement, and I loved how they continued to be friends even as their non-platonic feelings started to freely surface. And that was the thing--pretending to be lovers was like the opening that was needed for them to not be so careful about those more intimate looks and so on. Another thing I loved about this book was the fact that there wasn't a hint of unnecessary drama with as far as Logan, Summer's twin brother and Oliver's best friend, was concerned. Kudos to him wanting two of the most important people in his life to be happy. I also enjoyed getting to know this new set of characters that make up the Guys Who Got Away series, and I'm already excited to read the next three books. For now, though, I'm quite happy to award 4.5 stars to Dear Sexy Ex-Boyfriend.